S. Korea seeks breakthrough in free trade talks with EU
20-Nov-2007 Hankyoreh
South Korea’s chief negotiator in free trade talks with the European Union (EU) said on Monday that Seoul will redouble its efforts to make a breakthrough on some sticky issues, including a dispute over auto trade, and called for an "equal" effort from Brussels.
South Korea aims to retain agriculture tariffs at EU FTA talks
16-Nov-2007 Asia Pulse
The Ministry of Agriculture and Forestry said that rice will be exempted from free trade agreement talks altogether, while Seoul will stress the need to hold onto some protection for grain, vegetables and fruits.
Korea to sweeten offer at next EU FTA talks
15-Nov-2007 Chosun Ilbo
Korea plans to accept a number of the European Union’s demands for lifting tariffs on EU goods in the fifth round of the Korea-EU free trade agreement talks slated for Nov. 19 in Brussels
Korea seeks speedy free trade pact with EU
14-Nov-2007 Chosun Ilbo
Korea’s top negotiator to trade talks with the EU wants a deal to be concluded by year’s end. 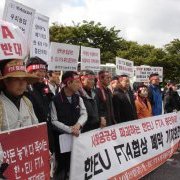 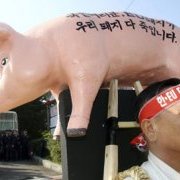 One man protests against FTA agreement
17-Oct-2007 China Daily
A farmer carries a model pig during his one-man protest in front of the hotel where South Korean-EU free trade talks are being held in Seoul
Korea, EU open 4th round of free trade talks
15-Oct-2007 Korea.net
The EU is demanding that Korea match reductions on beef and car-import tariffs that it granted the US in June.
This is the way some agreements should end
24-Sep-2007 IPS
Elaborate funeral rituals were performed in central Brussels over the past week to show how a planned free trade accord between the European Union and the Korean government should, in the view of anti-poverty campaigners, be buried.
0 | ... | 90 | 100 | 110 | 120 | 130 | 140 | 150 | 160 | 170 | 180