RP, Japan agree PJEPA overhaul
8-Nov-2011 Manila Bulletin
The Philippines and Japan are in agreement to undertake a comprehensive review of its bilateral free trade agreement, but are likely to clash in their objectives as the Philippines is set to go for more protection of its interest, like higher tariffs on some imports from Japan, in contrast to Japan’s call for further trade liberalization and other sectors covered under the agreement.
Comprehensive PJEPA FTA review pushed
17-Oct-2011 Manila Bulletin
The Philippines is expected to call for a comprehensive review of its free trade agreement with Japan to put the country in a better position, but such move should not be in conflict with Japan’s stance that the review should only focus on further liberalizing this bilateral trade agreement. 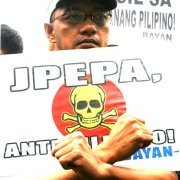 Aquino may take up PJEPA
19-Sep-2011 Manila Bulletin
The Philippine Department of Trade and Industry is studying whether it has to recommend the inclusion of the Philippines-Japan Economic Partnership Agreement or not in the agenda of the official visit of President Aquino in Japan later this month. 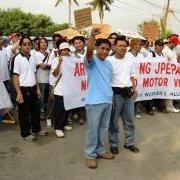 SC urged to rule against implementation of Japan-Philippine trade deal
11-Aug-2011 Inquirer.net
A multisectoral group urged the Philippine Supreme Court to rule on its petition filed in 2008 that sought to stop the implementation of the Japan-Philippines Economic Partnership Agreement (JPEPA).
Caregiver training
26-Jul-2011
The third batch of Filipino caregivers who completed a pre-training course in Japanese left for Tokyo Monday to complete their training prior to becoming fully accredited caregivers in Japan.
Senate archives Chief calls Senators ’liars’
5-Jul-2011
A section chief at the Senate accused lawmakers who signed the Japan-Philippines Economic Partnership Agreement (JPEPA) of being “big liars” and betraying public trust as she revealed that contrary to the interest and safety of the Filipinos, toxic and nuclear wastes from Japan will be brought into the country.
Malacañang urged to review PJEPA
23-May-2011
Congress has urged Malacañ ang to make a comprehensive review of the Philippine-Japan Economic Partnership Agreement (PJEPA) and focus on investments and exports.
Lawmakers seek entry of more nurses in Japan
23-May-2011
The House committee on economic affairs endorsed yesterday a resolution seeking the renegotiation of the Japan-Philippines Economic Partnership Agreement (JPEPA) to allow the entry of more Filipino nurses in Japan.
Japan cuts Filipino nurses some slack
9-Feb-2011
Since the Japan Philippines Economic Partnership Agreement (JPEPA) was implemented in 2009, only one Filipino nurse qualified to work in Japan after going through rigorous application and hiring procedures, an official of the Japanese embassy in Manila said Tuesday.
Nursing exam to include English translation
25-Aug-2010
A health ministry panel on Tuesday compiled a set of changes in the national nursing examination that include providing English translations to explain difficult Japanese terms for foreigners.
0 | 10 | 20 | 30 | 40 | 50 | 60 | 70 | 80 | ... | 270