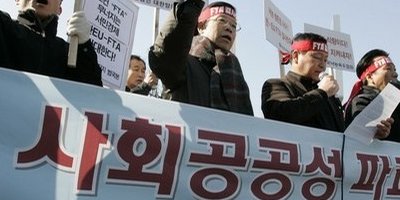 The European Union is carrying out an important programme on bilateral treaties in the trade arena. This programme stems from the EU’s previous efforts in "development cooperation" — aid and assistance programmes to developing countries, with an emphasis on the former European colonies. Gradually, over the 1980s and into the 1990s, the EU’s development cooperation policies took on quite a different slant: to create a suitable trade, investment and legal climate for European companies, so that they can further penetrate overseas markets.

Today, many EU bilateral treaties are dubbed "partnership agreements" or "association agreements". In essence, they are FTAs. The main thrust is to get each country they sign with to adopt the same laws and policies relevant to business and trade as the EU itself. The agreements cover intellectual property, labour, investment, services, culture, etc. They provide special tariff reductions for exports to the EU, such as agricultural goods and textiles, and special provisions on migration of people to the EU.

Many of these agreements are driven by a desire to keep control of former European colonies. For example, the Cotonou Agreement (formerly known as the Lomé Convention) binds the EU to 76 African, Caribbean and Pacific countries. It is the EU’s prime instrument to retain privileged relations with the former colonies. Others are driven by direct competition with the US, and no historical ties. For example, as soon as NAFTA was signed, European representatives flew to Mexico to offer a bilateral agreement with the EU. And with the FTAA negotiations, the EU is working hard to sign its own private deal with MERCOSUR. Yet others mix the two motives. The Mediterrean partnership programme is both a means to draw North Africa and the Middle East into a very tight relation with the EU — almost as an annexe to the Union — and a direct leverage against US influence in the EU’s backyard.

The EU’s bilateral treaties go through the European Parliament for approval. This means that there is some space for citizens to challenge them, but the Parliament hardly does. Why? Perhaps because they are drenched in their legacy of assistance programmes for poor ex-colonies and don’t stand out for what they really are: tools to enforce and reinforce Europe’s empire in strategic parts of the world.