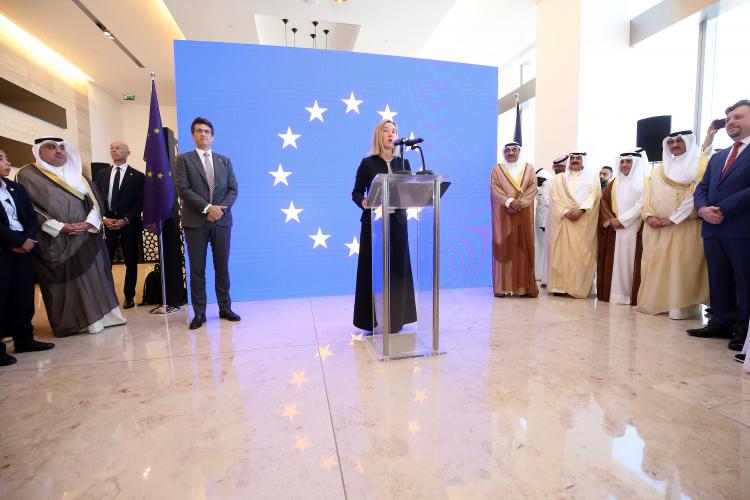 GCC-EU free trade talks make progress on issues
27-Oct-2005 Gulf Daily News
The European Union and the GCC wound up talks on a long stalled free trade deal yesterday without agreement on opening up the region’s lucrative services sector.
EU-GCC free trade talks today
25-Oct-2005 The Peninsula
The European Union and the oil-rich Gulf Cooperation Council will meet this week to discuss a long-stalled free trade deal, officials said yesterday.
GCC-EU very close to striking free trade agreement — diplomatic source
1-Oct-2005 KUNA
The Gulf Cooperation Council and the European Union are very close to striking a free trade agreement as coordination on this issue is in its final stages, an informed diplomatic source close to the process told Kuwait News Agency.
Gulf states and EU set to hold FTA talks in New York
29-Aug-2005 Gulf News
GCC and EU foreign ministers will hold crucial talks in New York next month to remove obstacles hindering a free-trade agreement between the two groups.
GCC-EU Free Trade Agreement: a political imperative
14-Jul-2005 Dubai Quality Group
The way to counter the momentum of the US bilateral push would be to quickly bring to conclusion the deal between the GCC and the EU and through such a mechanism reinvigorate the multilateral approach to regional relations.
Sustainability Impact Assessment of the negotiations of the trade agreement between the European Community and the countries of the Cooperation Council for the Arab States of the Gulf
14-Apr-2005 SIA
Study commissioned by the European Union
Measuring the economic impact of an EU-GCC free trade agreement
14-Apr-2005 CEPS
The new customs union and proposed EU-GCC free trade agreement will both appreciably expand trade and improve economic welfare in the GCC countries, with little significant economic impact on the EU.
GCC-EU pledge historic FTA
6-Apr-2005 Gulf Daily news
The GCC is on its way to securing a world first in terms of international economic and trade agrements. Talks with the European Union over the world’s first region-to-region Free Trade Area agreement will be completed by the end of the year, it was declared yesterday.
FTA talks to top GCC-EU agenda
5-Apr-2005
Progress in the Free Trade Area (FTA) negotiations will top the agenda of the annual GCC-EU foreign ministers meeting being held today in Bahrain, which currently chairs the GCC.
AGCC and EU to sign FTA soon
1-Apr-2005 Khaleej Times
The long-standing row over European duty on aluminium imports from the Gulf, a major irritant in EU-AGCC trade relations, is likely to be resolved this year with both sides gearing up for the final round of talks to seal a free trade agreement.
0 | 10 | 20 | 30 | 40 | 50 | 60 | 70 | 80
Subscribe to bilaterals.org weekly