Japan, RP agree on garments trade
17-Jul-2005 Manila Bulletin
While the Philippines and Japan still remained locked on three issues to finalize their Economic Partnership Agreement (EPA), both parties have agreed in principle for a zero for zero arrangement on the trade of garments and textile.
Labor issues to delay Japan-Philippines FTA
1-Jul-2005 Asia Times
The signing of an economic partnership agreement between Japan and the Philippines is likely to be pushed back to at least the end of the year due to disagreements over investment protections and quotas for care providers.
No quota under proposed JPEPA
27-Jun-2005 Manila Bulletin
The Japanese government is considering the position of the Philippines that there should be no quota and volume limit on the entry of Filipino IT and medical professionals to Japan but rather the entry of Filipino labor to Japan be driven by demand and qualification.
JPEPA: News in brief
23-Jun-2005 Manila Bulletin
The Philippines government is completing its "clean-up drive" on the country’s legal and dispute settlement mechanism before finally giving its final go signal to the implementation of the country’s first bilateral free trade area (FTA) deal, the Japan-Philippines Economic Partnership Agreement (JPEPA).
Trade alliance seeks transparency on Japan-RP FTA negotiations
18-Jun-2005 Manila Bulletin
The multi-sectoral Fair Trade Alliance (FTA) has urged the government for transparency in the crafting of the Japan-Philippines Economic Partnership Agreement (JPEPA) as it expressed fears that the deal does not provide "safeguards" to the country’s industrial goods and includes regulation and competition issues.
NGO coalition bucks free trade talks with Japan
11-May-2005 Philippine Star
A coalition of non-government organizations is opposing the free trade talks under the Japan-Philippines Economic Partnership Agreement (JPEPA) saying the Philippines would wind up as the losing party if the deal pushes through.
Vigilance related to the Philippine-Japan Free Trade Agreement
5-May-2005
While in Japan, our attention has been called to thoroughly examine the free trade agreement (FTA) between Japan and the Philippines 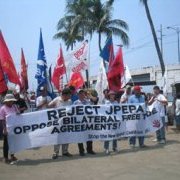