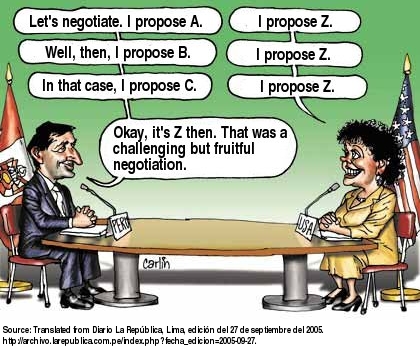 In May 2004, the US began negotiations with Colombia, Ecuador and Peru to reach some form of FTA with the three Andean countries — and later, if US plans worked out, Bolivia as well.

Since then, a number of special tensions have marked these FTA discussions. One is that the Andean countries have been reluctant to go beyond their WTO obligations in terms of intellectual property rights. The governments have kept expressing strong concerns about biodiversity, traditional knowledge, and access to medicines. Another overwhelming concern has been with regard to agriculture, where the Andean countries are reluctant to liberalize their markets on bilateral terms if the US will not agree to reduce domestic subsidies. An underlying concern has been how the FTA would interact with Andean Community law; that is, which of the two would take precedence. Regarding the US side, Washington’s lack of flexibility has been pointed out by many as a hallmark of the process. For that reason, many people refuse to call these “negotiations“.

Indigenous peoples, farmers’ organizations, labour unions, and other social movements have been heavily mobilizing to stop this FTA. The FTA has been seen from the start as a thorough capitulation to US economic and geopolitical interests. In Colombia, Ecuador, and Peru, different sectors have pushed for national referenda on the FTA in their respective countries — and on several occasions organized their own.

In late September 2005, the US issued an ultimatum to sign an agreement by 20 November 2005 — before the 2006 electoral process in all three Andean countries and the mid-2007 expiry of Bush’s “fast track“ trade negotiating authority. No agreement was reached by end November, with Colombia and Ecuador holding back on several grounds and Peru saying it would proceed alone.

Since Peru signed a bilateral trade deal with the US in December 2005 and bilateral negotiations continuing with Colombia as of that date (until the US-Colombia deal came into force in March 2012), information on subsequent events is presented separately under US-Peru and US-Colombia.

As to Ecuador, Quito’s cancellation of a contract with Occidental Petroleum (Oxy) in May 2006 sounded the death knell for negotiations around a US-Ecuador FTA. With this decision, the government of Ecuador obeyed its law and the demands of the majority of Ecuadorans, who had been calling for an end to the negotiations and for Oxy’s departure.

U.S. trade issue looms over Colombia and Peru
28-Aug-2006
Major exporters from Colombia fear being blindsided by tariffs up to 20 percent on key exports to the United States unless special trade preferences designed to wean the Andean nations off of cocaine production are renewed before their expiration Jan. 1.
Venezuela’s Chavez looms large over US vote on Peru trade pact
15-Jul-2006 Mercury News
Free-trade agreements generally set tariffs on beef and commodities and deal with government procurement contracts and labor provisions. But as US Congress prepares to vote on a contentious free-trade accord with Peru, the figure of Venezuelan President Hugo Chavez is looming large.
Bolivia changes mind on US trade deal
17-Jun-2006 AP
The government of President Evo Morales said Friday it hopes to negotiate a free trade agreement with the U.S., a policy turnaround apparently influenced by pressure from business groups.
Song of the sirens: Why the US-Andean FTAs undermine sustainable development and regional integration
14-Jun-2006 Oxfam
US free trade agreements with Peru and Colombia, as well as the possible agreement with Ecuador, were negotiated under the promise of great opportunities in the world’s richest market, but the truth is that these agreements will have a devastating impact on the livelihoods of small farmers, public health, and the regulation of investment to protect the public interest.
Andean Community: Grasping at unity straws
14-Jun-2006
The foreign ministers of the Andean Community of Nations (CAN) forged ahead in attempts to quiet fears of an imminent collapse of the bloc following Venezuela’s withdrawal, despite member-country political differences that were all too evident at the regional summit.
Andean bloc seeks US trade extension
14-Jun-2006 Aljazeera
Andean leaders have agreed a new course for their trade bloc without Venezuela. They plan to urge Washington to extend expiring trade benefits designed to help counter cocaine production in the South American region. 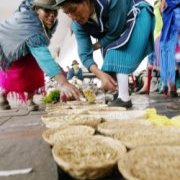 Is free trade just? Church speaks for those who fall through cracks
14-Jun-2006 Catholic Online
Free trade agreements have become a bone of contention again in the Andes, and Catholics must take a stand, said an international economic development policy adviser for the US bishops.
Top Ecuador FTA negotiator resigns
2-Jun-2006 Upside Down World
More fall out from the Ecuador-Oxy clash: things went from bad to worse for Ecuador-US Free Trade negotiations when Ecuador’s Minister of Finance, Jorge Illingworth and his successor, Manuel Chiriboga both resigned.
Ecuador: Government gears up for Oxy fallout
26-May-2006 IPS
Showing the door to Occidental Petroleum (Oxy) and scuttling US free trade negotiations have long been agenda priorities for Ecuadorian social movements and political sectors. But following government steps that have all but made these goals a reality, the atmosphere seems more anxious than celebratory.
US oil firm files arbitration claim against Ecuador for ’expropriation’
18-May-2006 ANTARA
The US-based Occidental Petroleum Company has filed an arbitration claim against Quito for canceling its exploration rights, a move that resulted in a suspension of free trade talks with Washington.
0 | 10 | 20 | 30 | 40 | 50 | 60 | 70 | 80 | ... | 180