Gas imports: India wants US to consider free trade pact
29-Nov-2012
To enable import of gas from the US, India has asked the US Government to consider a free trade agreement (FTA).
NGOs express concern over ongoing US-India Bilateral Investment Treaty
19-Jun-2012 PharmaBiz
A group of public interest organisations in India have expressed concern about the ongoing US-India Bilateral Investment Treaty (BIT).
US officials coming to India for talks on investment pact
2-Mar-2012 Hindu Business Line
US officials would soon travel to India for talks on Bilateral Investment Treaty (BIT), a top trade official has said, hoping the talks would conclude soon.
India, US move forward on investment protection treaty
9-Nov-2011 PTI
The proposed India-US investment protection treaty is back on the negotiating table and is moving forward, Commerce Secretary Rahul Khullar said today.
India should go via Canada to boost trade with US: Report
4-Jul-2011
India’s route to boost its trade with the US lies through Canada, says a report here.
US investors seek hassle-free entry into Indian economy
2-Jul-2011
Officially, the mission of Pranab Mukherjee’s just-concluded trip was to attend the second annual meeting of the India-US Financial and Economic Partnership. The finance minister brought with him perhaps the most star-studded Indian economic team to visit Washington for a bilateral event.
India, US to fast track bilateral investment treaty dialogue
23-Jun-2011 The Hindu
India and the United States on Wednesday agreed to fast-track technical negotiations for early conclusion of a Bilateral Investment Agreement during a meeting between Commerce and Industry Minister Anand Sharma and U.S. Trade Representative Ron Kirk.
India favours trade-opening pact with US
9-Nov-2010 PTI
Enthused by the success of US President Barack Obama’s visit, India on Tuesday said it is time to “seriously consider” a trade-opening agreement with America, similar to the ones entered with the ASEAN and South Korea. 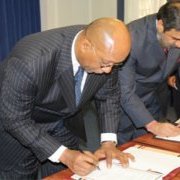