Malaysia-US FTA likely after end of Bush administration - report
14-Nov-2007 Forbes
A free trade agreement between Malaysia and the United States is likely to be deferred until after November next year from the early 2008 target set previously as attention focuses on the upcoming US presidential election, the Edge Financial Daily reported on Wednesday.
US envoy to Malaysia urges conclusion to free-trade pact
19-Sep-2007 AFP
The United States’ new ambassador to Malaysia on Wednesday urged both countries to conclude negotiations for a free trade agreement after a missed deadline appears to have slowed the pace of talks. 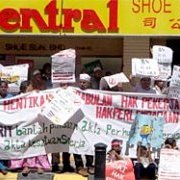 Hundreds of Malaysians protest against Free Trade Agreement
1-Sep-2007 SWO
On Sunday 26 August more than 500 people staged a strong anti US-FTA protest in the centre of Malaysia’s capital, Kuala Lumpur. Most of the protesters were farmers from the northern rice-bowl state of Kedah, or workers and urban settlers.
US, Malaysia could strike trade deal next year - USTR
28-Aug-2007 Reuters
The United States and Malaysia could finish talks on a free trade agreement in 2008, even though the Bush administration has lost key legislative authority, a top US trade official said on Monday.
Malaysia-US FTA talks nothing to do with Malaysia’s domestic policies: DPM
17-Jul-2007
Malaysia’s ongoing negotiations with the United States on a free trade agreement (FTA) will not involve any of Malaysia’s domestic policies such as that related to the special status for Bumiputeras, Deputy Prime Minister Datuk Seri Najib Tun Razak said Tuesday.
US aims to conclude FTA talks with Malaysia by second quarter 2008, says official
17-Jul-2007 IHT
"Both sides would like to finish this as quickly as possible," a US official told reporters
Police probe circulation of anti-FTA brochures
26-Jun-2007 The Star
Malaysian police are investigating the distribution of pamphlets protesting the signing of Free Trade Agreement (FTA) between Malaysia and the United States.
Washington wants rice included in FTA talks with KL
8-Jun-2007
The US Government said Malaysia must open its rice market to reach a free trade agreement, opposing the protectionist stance of the South-East Asian nation.
Malaysia and US to hold informal FTA talks
29-May-2007 FTA Malaysia
Malaysia and the US will be holding informal FTA talks to iron out various issues instead of planning for another formal round of negotiations, according to reports. Both sides last met in April in the US.
Malaysia-US FTA at technical stage, says Rafidah
8-May-2007
Negotiations on the Malaysia-US Free Trade Agreement has reached the technical stage, the Dewan Negara was told Tuesday.
0 | 10 | 20 | 30 | 40 | 50 | 60 | 70 | 80 | ... | 180