Thailand suspends US free trade talks due to poll
1-Mar-2006 Reuters
Thailand has suspended free trade talks with the United States and delayed signing a deal with Japan until after an April 2 election called by Prime Minister Thaksin Shinawatra, officials said on Wednesday. 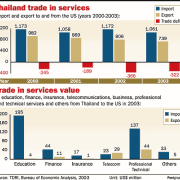 Trade negotiations command attention
28-Feb-2006 Bangkok Post
Amidst the promises of positive benefits of FTAs to Thailand, more and more citizens are raising questions, especially in relation to the services and investment sectors.
American Ambassador: It’s no secret
24-Feb-2006 Bangkok Post
When the former head of the Thai negotiating team, Nitya Pibulsonggram, was asked why the Thai-US trade deals must be kept confidential, he told journalists that he was asked by the US negotiation team to initial the agreements, but that he refused to do so. We asked US Ambassador to Thailand Ralph Boyce some questions concerning the confidentiality of the Free Trade Agreement.
US-Thailand: Talks could slow over plant and drug issues
19-Feb-2006 Bangkok Post
Differences over pharmaceuticals could be overcome, but the countries are far from reaching a common understanding on biodiversity issues.
Thailand-US FTA talks likely to extend beyond April
19-Feb-2006 MCOT
Although the local political situation has become heated, with rumours on dissolving the parliament prevaling in the country, the Thai-US negotiations will continue, Naris Chaiyasoot, Director General of the Ministry of Finance’s Fiscal Policy Office, said.
US meets resistance on full access to finance
18-Feb-2006
A seminar heard yesterday that although US negotiators had asked Thailand to fully deregulate its financial services and allow US investors unrestricted stakes in the brokering and banking sectors, Bangkok was insisting that the sector was not ready to face direct competition.
Free trade could cost plenty
18-Feb-2006 Bangkok Post
Supara Janchitfah looks at the rules of the Thai-US FTA negotiation process and finds them more favourable to the American side.
Govt opens FTA dialogue
14-Feb-2006
Deputy Prime Minister and Commerce Minister Somkid Jatusripitak asked academics to keep an open mind on the proposed Thai-US Free Trade Area agreement, saying that the FTA would benefit the two countries equally.
Anti-Thaksin rally: Coalition gains momentum
11-Feb-2006 The Nation
The new Royal Plaza alliance of senators and civic groups has boosted the credibility of the movement to oust Thailand’s Prime Minister Thaksin Shinawatra and produced an array of new issues from free trade to human rights violations and the plight of the rural poor
Don’t rush to sign FTA, Nesac warns
9-Feb-2006
The National Economic and Social Advisory Council yesterday warned the prime minister not to let the immediate gains from opening trades with the US blind him to the latent risks of rushing into an economic partnership.
0 | 10 | 20 | 30 | 40 | 50 | 60 | 70 | 80 | ... | 200