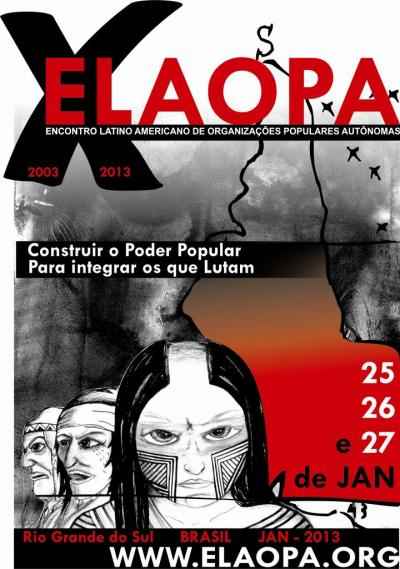 From 25th to 27th January 2013, ELAOPA returned to the city of its birth to commemorate ten years of the difficult but necessary journey to building people’s power in Latin America. It seeks to “maintain its independence in the face of political parties, the state and its governments, NGOs, companies and all those that, with authoritarian structures distant from our realities, come to tell us what we have to do.”

“Since the first encounter we have proposed to join our hands and forces to change the brutal and unjust reality of more than 500 years of oppression on our continent. In this Latin America that, at the end of the 20th century, was the target of the neoliberal policies and programme applied by the Washington Consensus – promoter of free trade, privatisation, deregulation of the economy, tax reforms and the reduction of public spending. In this context the threat came under the acronym of FTAA [1], but at the same time the struggles of resistance that imposed partial defeats through popular direct action, brought down governments, reverted privatisations and put state coups in check were various. Since then ELAOPA has served as a space for the accumulation of diverse organisational experiences, strengthening the fields of action in the popular, union, student, community, environmental, peasant etc. camps.”

The first annual Latin American Encounter of Popular Autonomous Organisations (Encontro Latino Americano de Organizações Populares e Autônomas – ELAOPA) took place in Porto Alegre, Brazil, in 2003. It ran alongside the first World Social Forum (WSF), also held in Porto Alegre, marking a counter-encounter of popular organisations and social movements characterised by class struggle and identification as original people of the South American continent. It sought an autonomous space independent of the involvement and interference of states, political parties and NGOs that characterised – and continue to characterise – the WSF.

Since the first encounter in 2003, ELAOPA has taken place annually in various countries across Latin America such as Brazil, Uruguay, Argentina, Chile and Bolivia, “always promoting and regulating its organisation under the principles of class independence, solidarity, popular struggle and grassroots democracy and having as its perspective the Latin American articulation and coordination of popular organisations, movements, spaces and identities of the various countries that have participated in the encounter for the construction of a power that is ours, a people’s power”.

From 25th to 27th January 2013, ELAOPA returned to the city of its birth to commemorate ten years of the difficult but necessary journey to building people’s power in Latin America. It seeks to “maintain its independence in the face of political parties, the state and its governments, NGOs, companies and all those that, with authoritarian structures distant from our realities, come to tell us what we have to do.” Activists from, amongst others, Chile, Argentina, Uruguay and Brazil participated; from libertarian student movements, community-based organisations and trade unions, to recyclable waste collectors’ and peasant and agricultural workers’ movements.

As with previous ELAOPAs, it was structured into thematic commissions (union, student and education, community, communication, peasant/agriculture, human rights, muralismo [3], gender/ethnicity and accessibility), various workshops and talks (photography, austerity and popular struggles in Europe, popular education, community radio, etc.) and a plenary with a transversal theme common to all participants; in this case the IIRSA Plan and building people’s power in Latin America.

In line with its political principles the encounter was completely self-managed, with the participants of the various thematic commissions also being responsible for the practical and logistical aspects of the encounter, such as preparing food for participants and cleaning the venue.

The 10th ELAOPA was dedicated to the memory of the life and struggle of Alberto “Pocho” Mechoso, a founding member of the Uruguayan Anarchist Federation (FAU), unionist in the Meat Workers Federation and an active militant of the Organización Popular Revolucionario Orientales-33 (OPR-33) – the armed wing of the FAU. Arrested in Buenos Aires on September 26, 1976 as part of the Condor Plan, his body was found on May 23, 2012 with seven others on the seabed, in barrels filled with cement..

In considering the current social, political and economic conjuncture in Latin America ELAOPA notes that, while important differences between the neoliberal governments of the past and the current so-called progressive governments exist, there are also structural similarities which present limits to and impede the true emancipation of the people.

One such example that demonstrates the continuity between the policies of previous neoliberal governments and the so-called progressive ones is former Brazilian President Lula da Silva’s about-face with regards to the development of a hydroelectric dam complex in the Xingu river basin, in the heart of the Amazon. First conceived in the 1970s under the military dictatorship, Lula was severely critical of the project. The initiative was rejected by the Encounter of Indigenous People in 1989 and attracted international criticism for the threats it posed both in social and environmental terms. However, he changed his stance to that of defending the project as essential for progress shortly after he took office as president. Around the same time he and his Workers’ Party (PT) were involved in convening the first WSF.

The economies of the so-called progressive governments of Latin America are based on an extractive capitalist model, primarily in the agro-mineral sector, driven by a local ruling elite. This elite is committed to giving concessions to the dominant energy and mining multinationals while at the same time trying to forge an alliance between the rulers and the ruled by means of a politics of class conciliation (for example, dialoguing through the WSF). It is this extractive capitalist model which stimulates economic growth and the financing of a certain increase in social spending. This somewhat reduces the daily misery of the people, thus allowing for the re-election of these “progressive” governments. At the same time, however, it reinforces the legacy of, and subjugation to, imperialism through an elite pact between local elites – the IIRSA Plan – designed to further open the continent to transnational plunder.

IIRSA is an agreement signed by the presidents of 12 South American countries in 2000 to facilitate the integration of the physical infrastructure of the region, prioritising the strategic areas of transport, energy and telecommunications.

“Under the pretext of independent and sustainable development, socio-cultural integration and modernisation IIRSA is consolidating a model of political and economic domination, enabling – in the framework of the so-called progressive governments – strategic projects and actions for the opening of the territories of the different countries to the exploitation and profit of various transnationals. The guarantee of the free circulation of commodities and capital on the continent, territorial reorganisation on the basis of criteria of control and of commercialisation, and a so-called modernisation and actualisation of regulatory frameworks in the environmental and infrastructure areas are integral elements of the IIRSA Plan that have shown themselves to be one more initiative for the plunder, exploitation and domination of the Latin American territories and people.”

It is this continuity of neoliberal economic policies and the complicity of “progressive” governments in facilitating the “plunder, exploitation and domination of the Latin American territories and people” – from former President Lula in Brazil to Evo Morales in Bolivia today – that highlights the need for people’s struggle outside of and against the state.Also it shows the need for spaces such as ELAOPA that are independent of state and party interference and co-option. The brutal state repression of indigenous peoples’ struggles in Bolivia against the construction of IIRSA-related infrastructure in Bolivia, such as the construction of a highway through protected indigenous territories and Morales’ unilateral declaration in 2010 that, “Whether you want it or not, we are going to build this road” give further testament to the affirmation at ELAOPA that;

“[...] for the emancipation of the oppressed Latin Americans, the path continues to be that of popular struggle. Co-option and clientelism are effective attempts that the system uses to fragment us, but they are not capable of suffocating the resistance. We continue firm in our tasks, organising ourselves, struggling and resisting at the local level, denouncing the projects of IIRSA and constituting a political and ideological counter-position to the system’s mechanisms of control throughout these five centuries of domination on our continent. We advance spreading solidarity, building people’s power with class independence and promoting direct action against injustice. For the integration of those that struggle!”

The experience of ELAOPA and the process of building people’s power in Latin America should serve as an example for the dominated, exploited and oppressed the world over. The way forward lies in building peoples’ organisations, movements and struggles on the basis of class independence, solidarity, popular struggle and grassroots democracy. These must be independent of political parties of all types, the state and government, NGOs, companies and “all those that, with authoritarian structures distant from our realities, come to tell us what we have to do.” It is only through these organisations of counter-power that the path to true emancipation through the construction of people’s power can be found.

“Build People’s Power for the integration of those that struggle!”
Class Independence, Solidarity, Popular Struggle

[1] Free Trade Area of the Americas

[2] All quotes from the newspaper issued by ELAOPA for its 10th annual encounter.

[3] “Muralismo” refers to the activist culture of mural painting in Latin America.