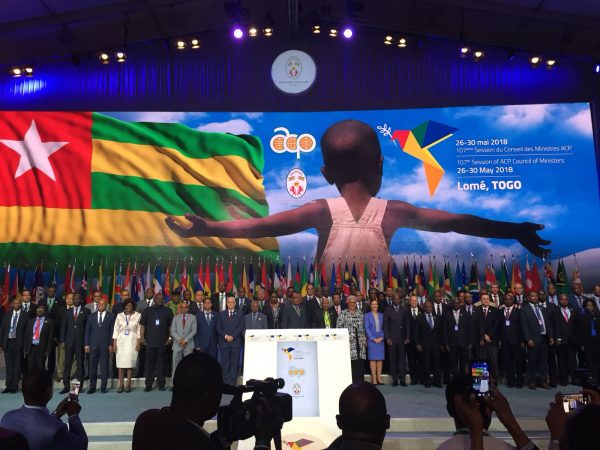 The Africa, Caribbean and Pacific (ACP) negotiating mandate for the Post-Cotonou Partnership Agreement with the European Union was unanimously adopted at the 107th Session of the ACP Council of Ministers which took place in Lomé, Togo, on 30th May.

Apart from the discussions on the future of the ACP Group and its relations with the European Union, the 107th Session of the ACP Council of Ministers addressed strategic matters such as repositioning the ACP group as a more effective global player in order to respond better to the needs and aspirations of its ACP Member States. Ambassador Faure, Secretary of State for Foreign Affairs in the Department of Foreign Affairs, heading the Seychelles delegation, made a presentation to the special session on this subject.

Ministers also addressed ways of leveraging the principles of complementarity and subsidiarity between the ACP Group and the Regional and Continental organisations, sustaining financing of the Group and lastly advancing the climate change agenda in a repositioned ACP Group.

He called on the member states to sign the instruments for the Joint Undertaking on the Customs Cooperation Agreement with the objective of increasing intra-ACP partnership and deepening integration. To note that only 13 countries, including Seychelles, out of the 79 have signed this agreement.

43rd session of ACP-EU Council of Ministers: both sides commit to enhance their cooperation

The annual meeting of Ministers from the European Union and the countries in Africa, the Caribbean and the Pacific was an opportunity to hold fruitful and constructive discussions on the way forward for their future relationship and to take stock of the progress already made.

The EU welcomes the adoption by the African, Caribbean and Pacific Group of States of its Negotiating Mandate, which will lead its members to start meaningful negotiations soon. This ACP-EU 43rd Session was crucial in taking preparatory steps towards the negotiations and underlined the importance the longstanding partners attach to their cooperation including after 2020.

The EU Commissioner for International cooperation and Development, Neven Mimica, expressed his gratitude for the excellent collaboration in Lomé, and called for a new ambitious partnership: “This is a very defining moment. We are determined to strengthen and reinforce our relationship with the ACP even further and to conclude an ambitious political partnership, which will allow us to jointly address our common challenges and opportunities – to the benefit of all our citizens, both in Europe and in the ACP countries alike.”

For her part, Senator the Honourable Kamina Johnson Smith, Minister of Foreign Affairs and Foreign Trade of Jamaica stated that the imminent expiry of the current Cotonou Partnership Agreement provides a unique opportunity for us to modernize our relationship that is fit for purpose and will help us together to refine our approaches to national and regional issues, and define our ability to contribute collectively to a stable and progressive international environment, leaving no one behind.

Outcomes of the Ministerial meeting

As like-minded partners, the ACP Group of States and the EU agreed to increase their international cooperation in key areas, such as climate change, migration and throughout the upcoming UN Conferences this year. A specific calendar should be developed accordingly in the coming weeks.

Further cooperation is expected in the area of inclusive sustainable growth as the EU and the ACP Group of States exchanged views on how to increase trade, strengthen investment and management of natural resources, addressing the vulnerabilities of ACP Countries and the situation of middle income countries and take appropriate steps in relation to issues of EU list of non-cooperative jurisdictions for tax purposes.

Both partners reaffirmed their commitment to tackling climate change through a joint declaration in anticipation of the upcoming UNFCC 24th COP on Climate Change to be held in December 2018 in Katowice, Poland.

The EU-ACP partnership is one of the oldest and most comprehensive frameworks of cooperation of its kind. Uniting more than one hundred countries and over 1.5 billion people, the Cotonou Agreement governing EU-ACP relations is due to expire in February 2020.