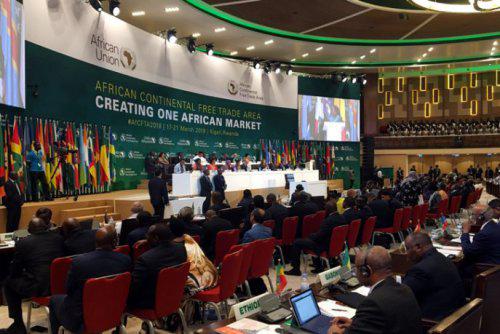 Having attained the threshold of 22 ratifications needed to enter into force, the African Continental Free Trade Agreement (AfCFTA), yesterday, became a binding international legal instrument, even though critical parts of the agreement are yet to be completed.

Having met the minimum threshold of ratifications, the operational phase of the agreement will be launched this July, at the Africa Union summit.

But meeting the minimum ratifications does not mean immediate commencement of implementation of the agreement; it is the penultimate step towards implementation, as this is still subject to negotiations on a number of aspects and modalities.

For instance, Africa’s richest man and industrialist, Aliko Dangote, in a conversation with Mo Ibrahim last month, raised concerns about the visa regime in the continent, saying African governments need to make regional trade workable before swinging fully into the continental trade agreement.

The Billionaire explained that there is no free movement within regional markets, citing the case of the Benin Republic, which does not allow his cement products but rather import from China. Indeed, the extent to which the AfCFTA will reduce barriers to intra-African trade is largely linked to the ongoing negotiations, including countries’ schedules of tariff concessions and services commitments, rules of origin, investment, intellectual property, competition, and possible protocol on e-commerce.

Specifically, national legal regimes must also be updated to reflect interstate agreements. International trade agreements are not self-executing; they are implemented through domestic measures such as new customs procedures and domestic regulations for foreign service providers and investors.

Though Africa is projected to have a combined consumer and business spending of $6.7 trillion by 2030, there are concerns about Nigeria’s refusal to sign the deal, being the largest market in the continent.The Federal Government, through the former Minister of Industry, Trade and Investment, Okechukwu Enelamah, had said Nigeria will soon join other members in the free trade arrangement.

But the Manufacturers Association of Nigeria (MAN), had insisted that Government specifies the protectionist mechanism to check the influx of goods that may collapse domestic manufacturing.The negotiations are a complex issue, as it involves multiple stakeholders over a range of issues. The process is expected to take up to one year before the agreement takes effect in June 2020.

The trade bloc spanning 49 countries with a combined GDP of $3 trillion, will facilitate inter-regional trade, boost growth and help to alleviate poverty, its supporters say.

The African Union Commissioner for Trade and Industry, Albert Muchanga, tweeted: “Historic milestone! AfCFTA Agreement has today come into force. We celebrate the triumph of bold, pragmatic and continent-wide commitment to economic integration. We launch the market on 7 July; beginning the journey of transformation to secure inclusive prosperity”.

President Uhuru Kenyatta of Kenya said: “We must find a way where all of us come out as winners. We want Africa to come together for the mutual benefit of all countries”

According to industry observers, the implementation of the trade deal will be incremental.There will be one overarching trade arrangement, but specific commitments and opportunities will depend on the detail contained in the respective schedules. The private sector (the real traders) will need access to the correct information.

The negotiations for the AfCFTA protocols on trade in goods and services are well-advanced, but tariff schedules, rules of origin, and specific services sector commitments remain outstanding. The AfCFTA envisages liberalisation and integration of the services market. Priority sectors are transport, communications, financial services, tourism, and business services.