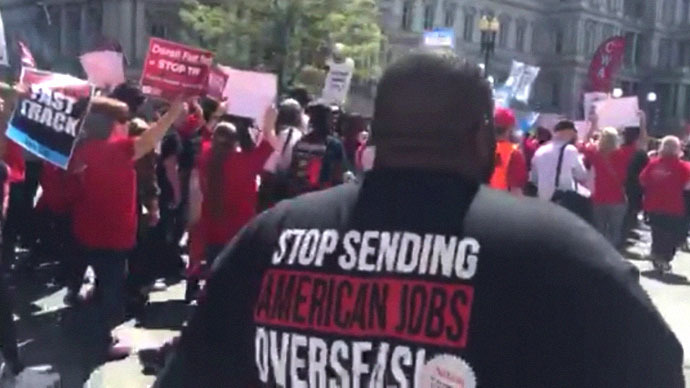 AFL-CIO President Richard L. Trumka has sent a sharply worded letter to President Obama chiding him for having "repeatedly isolated and marginalized labor and unions" in the debate over the president’s Pacific Rim trade accord.

In the five-page missive sent Monday, Trumka accused Obama of mischaracterizing labor’s stance on the Trans-Pacific Partnership (TPP), a 12-nation trade and regulatory deal that Obama is pursuing over widespread opposition among Democrats. Trumka also charged that the administration has rebuffed labor’s efforts to shape the terms of the deal.

"I would ask that you not mischaracterize our positions and views — even in the heat of a legislative battle," Trumka wrote, according to a copy obtained by The Washington Post. "You have repeatedly isolated and marginalized labor and unions as the only opponents of fast track and TPP. I am sure you are aware, however, that the critics of the current TPP encompass a broad, deep, and intellectually impressive swath of public opinion."

The letter represents the AFL-CIO’s latest attempt to block the Obama administration’s efforts to get Congress to approve fast-track trade promotion authority that would smooth the path for the completion of the TPP accord later this year. The House could vote as early as Friday on the fast-track legislation, approved by the Senate last month, but passage is not assured as trade supporters and opponents continue fierce lobbying efforts.

Asked about the letter at the White House daily briefing, press secretary Josh Earnest said that the president and organized labor share the goal of "expanding economic opportunities" for the middle class. But Earnest acknowledged a "sharp disagreement" on trade.

"This reflects a difference of opinion. It does not reflect a difference in the priority we all put on middle-class families," Earnest said. Citing public opinion polls, he added that "there is some evidence to indicate a majority of Democrats across the country agree with the president on this."

The Business Roundtable, the U.S. Conference of Mayors and a coalition of governors sent separate letters to House members Wednesday in support of the trade deal. The business leaders urged lawmakers approve fast-track legislation because without new trade deals "we risk ceding opportunities to and falling behind foreign competitors whose countries are actively negotiating trade agreements for their businesses, farmers and workers."

The AFL-CIO has launched an all-out effort to scuttle the deal, which the unions have framed as a repeat of previous trade pacts that have cost American workers jobs and lowered wages. In particular, they point to the North American Free Trade Agreement, signed by President Clinton in 1993, which liberalized trade between the United States, Mexico and Canada.

Obama has said the TPP will include the highest standard protections for workers and the environment, and lawmakers are also reviewing legislation that would offer economic assistance and retraining for workers who are displaced by the effects of the trade pact.

But the fierce opposition from labor has hampered the White House’s effort to build support, and Obama has sought to provide Democrats who support his deal with political cover.

In his letter, Trumka took particular offense at Obama’s comments, made in April, that some Democrats will never support trade deals because unions "on principle, regardless of what the provisions are, are opposed to trade."

Trumka pointed to a U.S.-Jordan free trade pact in 2000 as one the labor union supported. He accused the administration, especially the U.S. Trade Representative’s office, of ignoring suggestions from the AFL-CIO for shaping the TPP.

"Our efforts have largely been rebuffed," Trumka wrote. "Rather than engaging in a real dialogue with us about reforming the trade model and making changes to reflect our concerns, USTR’s primary response has been to change its talking points. This is not engagement, it is public relations spin."

When asked about the charges Wednesday, a spokesman for the USTR responded that unions have been involved in the discussions from the start.

"Two dozen union presidents serve on our trade advisory committees, and the Obama Administration put labor on industry committees for the first time in history," the spokesman said in an email. "Collectively, USTR officials have spent hundreds of hours meeting with labor advisers. As with any other stakeholder, labor has achieved many of their priorities in the negotiation, but not all of them. We are proud of the impact labor input has had on our negotiations and their positive contribution to trade policy over the years - including making labor standards fully enforceable."

Trumka has warned that his organization will make the trade vote a litmus test in next year’s congressional elections and that workers will punish Democrats who support the trade pact. The AFL-CIO has already taken aim at some of them, including Rep. Ami Bera (D-Calif.), running advertisements in local markets.

"Our goal is to ensure that as trade expands, growth is inclusive and prosperity is shared," Trumka wrote to Obama. "Unfortunately, current trade policies have achieved the opposite: While the U.S. economy continues to grow, the share going to working families is shrinking."