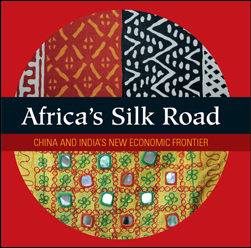 Skyrocketing Asian trade and investment in Africa show the beginning of a change in world trade patterns, according to a new report, Africa’s Silk Road: China and India’ New Economic Frontier.

The author of the report, World Bank Economic Advisor Harry Broadman, says that Africa is part of a global trend towards rapidly growing South-South investment and trade-trade among developing countries.

The report shows that exports from Africa to Asia tripled in the last five years, making Asia Africa’s third largest trading partner (27 percent) after the European Union (32 percent) and the United States (29 percent).

Indian and Chinese foreign direct investment also grew, with China’s amounting to $US1.18 billion by mid-2006.

China and India each have rapidly modernizing industries and burgeoning middle classes with rising incomes and purchasing power. These societies are demanding not only natural resource-extractive commodities, agricultural goods such as cotton, and other traditional African exports, but also diversified, nontraditional exports such as processed commodities, light manufactured products, household consumer goods, food, and tourism.

Because of its labor-intensive capacity, Africa can export these nontraditional goods and services competitively to the average Chinese and Indian consumer and firm.

"To be sure, if you take a snapshot of today, the overwhelming bulk of Africa’s exports to Asia is natural resources," says Broadman. "But what’s new is there is far more than oil that is being invested in-and this is an important opportunity for Africa’s growth and reduction of poverty because Africa’s trade for many years has been concentrated in primary commodities and natural resources."

Roadblocks along the way

While Asia accounts for one-quarter of Africa’s global exports, this trade represents only about 1.6 percent of the exports shipped to Asia from all sources worldwide. By the same token, FDI in Asia by African firms is extremely small, both in absolute and relative terms.

And, the rise of internationally competitive Chinese and Indian businesses cuts into both domestic sales and exports of African producers of, for example, textiles and apparels.

Despite these hurdles, China and India’s newfound interest in trade and investment with Africa-home to 300 million of the globe’s poorest people and the world’s greatest development challenge-offers an opportunity for growth and integration of the Sub-Saharan continent into the global economy.

Africa’s Silk Road illustrates how the two emerging economic giants of Asia now stand at the crossroads of the explosion of African-Asian trade and investment, a striking signpost of the new trend in South-South commercial relations.