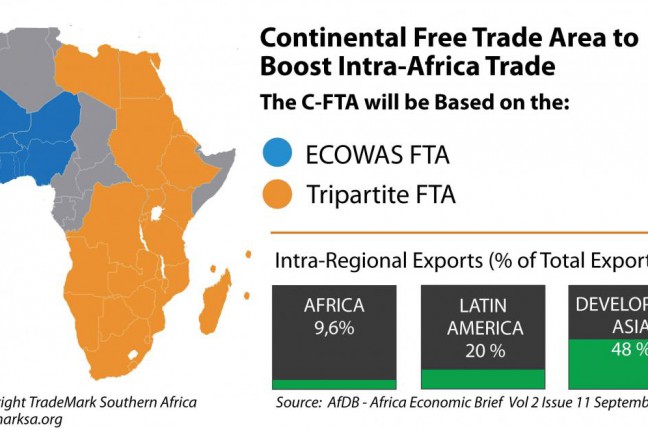 The CFTA will be a main topic at the 25th AU Summit scheduled for June 14-15 in Johannesburg.

The CFTA will create a market of over 1.3 billion people with a combined GDP of over two trillion U.S. dollars, Minister in the Presidency Jeff Radebe said at a press briefing in Cape Town after a fortnightly cabinet meeting.

Radebe said the CFTA will build on the Tripartite Free Trade Area (FTA) and progress achieved in the regional economic communities.

It will also give traders and investors access to a growing market and provide a basis for enhanced intra-Africa trade, said Radebe.

At its 18th Ordinary Session in January 2012 in Addis Ababa, the Assembly of Heads of State and Government of the AU adopted a decision and a declaration that reflected the strong political commitment of African leaders to accelerate and deepen the continent’s market integration.

The leaders agreed on a roadmap for establishing the CFTA by the indicative date of 2017.

As highlighted in the roadmap, the CFTA is set to build on the Tripartite FTA negotiations, which would create a free trade area among the 26 countries of the East African Community (EAC), the Common Market for Eastern and Southern Africa (COMESA) and the Southern African Development Community (SADC).

The AU wants the agreement to be fully implemented by 2016. The 26 tripartite countries represent close to 60 percent of the AU’s GDP and population, and an FTA among them would constitute a fundamental building block for the CFTA.