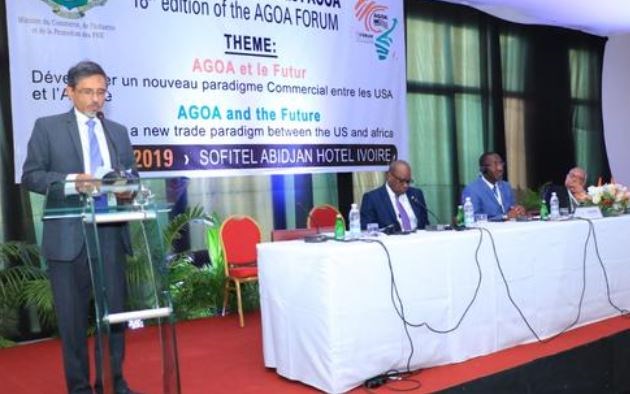 Africa wants one trade deal with the US, the US wants many

The U.S. and Africa have different views on their future trade relationship when a preferential access deal expires in 2025.

“To replace AGOA, we would like to see an agreement between the whole of Africa and the U.S.,” Muchanga said in an interview at the forum in Abidjan, the commercial capital of Ivory Coast. Africa should negotiate with “one voice” for a new trade pact after 2025, he said.

The U.S. and AU signed a joint statement on Monday at the AGOA Forum in Abidjan, saying they share a goal to enhance the AU’s effort to increase continental trade and investment under the African Continental Free Trade Area. The continent-wide trade agreement, that’s being driven by the AU, aims to create the world’s largest free-trade zone. It officially came into force in May and should be fully in operation by 2030.

The AGOA accord provides 39 sub-Saharan African countries duty-free access to the U.S. for about 6,500 products, ranging from textiles to manufactured items. The act was first signed into law by former President Bill Clinton in 2000 and extended for 10 years by former President Barack Obama in 2015. Nagy has said previously the U.S. intends to replace it.

The U.S. currently only has one free-trade agreement on the African continent — with Morocco — and is pursuing a trade deal with an unidentified country in sub-Saharan Africa. Nagy said that would be used as a model for others when AGOA expires.

The AGOA preference scheme is underutilized and that’s why it’s going to be very difficult to renew it in 2025, Muchanga said. The new continent-wide free-trade agreement will help businesses gain experience to supply to a bigger market and export more goods to the rest of the world, he said.

The value of trade between the U.S. and sub-Saharan Africa was $41.2 billion last year, making the U.S. the region’s third-largest trading partner. Trade with China was worth 3.5 times more.