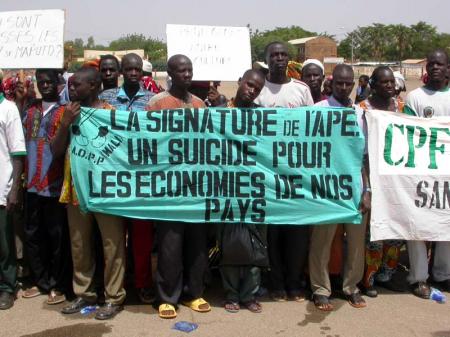 The EU is anxious to finalise talks with Africa over a planned Economic Partnership Agreement. If negotiators do not seal the deal by 1 October, preferential access to the EU’s internal market will be cut short, putting pressure on African negotiators, who feel their concerns are falling on deaf ears. EurActiv Germany reports.

"The EPA negotiations are like a soap opera on television: You never know when the last episode will come", said Ajay Bramdeo. Every time a conclusion seems to be near, new problems crop up, he said.

The negotiations are not coming to an end, said the South African and Permanent Representative of the African Union (AU) to the EU on Tuesday (3 June) in Berlin.

Indeed, the negotiations between the EU and 78 ACP (African, Caribbean and Pacific) countries over Economic Partnership Agreements (EPA) have been under way since 2002.

One of the central issues of the EPA concerns the so-called non-reciprocal trade preferences of the Lomé Convention (1975-2000). Talks were originally due to be concluded by 1 January, 2008, but the African side fought more and more determinedly against submitting to negotiations they felt were dominated by the EU.

Now, the EU is pointing a gun at the Global South’s chest. Countries which have not concluded an EPA by 1 October will lose privileged access to the EU’s internal market.

Bramdeo regrets the endlessness of the negotiations, but he more sharply criticises the EU’s established deadline.

It is not the Africans who are responsible for foot-dragging in discussions, he said, but the Europeans. The latter simply do not listen to concerns voiced by the South, Bramdeo pointed out.

The method is quite similar to that of a doctor who simply prescribes a medication, he explained. "We do not need to be told what is good for us. Please, give us the opportunity to decide for ourselves what is good for us", was Bramdeos urgent appeal.

The ACP states are mostly worried about individual EPA guidelines which are completely incompatible with regional economic agreements in Africa (for example ECOWAS). They "threaten Africa’s regional integration agenda", warned the ambassador.

If the African side were simply to accept the demands of the Europeans, this would lead to a fragmentation of regional economic communities, having "disastrous" effects, Bramdeo said. For this reason, he contended, "the development dimension in the EPA negotiations must also be considered."

And this is not the first time, Bramdeo indicated, saying that African countries expressed similar demands at the EU-Africa Summit two months ago in Brussels. Still, after 8 weeks there is only "deafening silence", Bramdeo stated.

But this is hardly a surprise, he added, arguing that the summit in Brussels was completely orchestrated for PR reasons. A genuine exchange of views was not able to happen at all, Bramdeo said, as it had been determined in advance, who would be speaking about which issue at what time.

"The speeches are written in advance. There is no interactive discussion or debate. You go there, read your statement and no one responds to it," Bramdeo said, frustrated.

For this reason, the format of these summits must be changed in the future, he commented. "Let the heads of state discuss among themselves. That is the political dialogue we need."

No trusted foundation for negotiations

If the dialogue remains as it is, Africa only has a slim hope, Bramdeo said. The trusted foundation of the EPA negotiations is being systematically undermined by the Europeans. Those African ambassadors who insist on national interests are constantly running the risk of being blamed by the European Partners as "rabble-rousers" – which, in the worst case scenario, could lead to their replacement.

In addition, the negotiations are not transparent enough, criticised the South African. A point of criticism that Klaus Schilder, from the aid organisation MISEREOR, agrees with: "The EU and the Commission were not honest about their own economic interests." But this is the fault of the member states, the aid worker stated, who are constantly promoting their own trade agendas.

The process is similar to negotiations on the planned Transatlantic Trade and Investment Partnership (TTIP) with the United States, "completely non-transparent and undemocratic", explained Schilder.

Meanwhile Daniela Zehentner-Capell from the German Federal Development Ministry (BMZ) admitted: "In the European Commission, the dialogue was not transparent enough. […] The EU member states did not force the Commission to lay its cards out on the table." But even so, she said, both sides are at fault. Dialogue on the African side was not good, particularly between the governments and civil society.

Bramdeo did not attempt to predict whether or not the EPA "soap opera" will actually come to an end this year. But in the interest of ACP countries, he hopes for more time and that negotiations with the EU will finally take place on a level playing field.