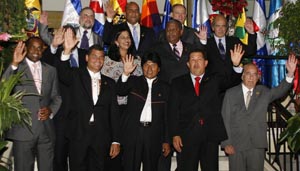 COCHABAMBA, Bolivia – The 7th Summit of the Bolivarian Alliance for the Americas, or ALBA, approved Saturday new steps for strengthening its model of “just and complementary trade” and ratified its struggle against “threats from the empire,” as the group calls the United States.

The decisions were taken at a meeting in the Bolivian city of Cochabamba attended by Latin American presidents Hugo Chavez of Venezuela, Ecuador’s Rafael Correa, Daniel Ortega of Nicaragua and the vice president of Cuba, Jose Ramon Machado Ventura.

The treaty for a Unified Regional Compensation System, or SUCRE, was the most important economic measure approved at the presidential meeting.

Its goal is to endow ALBA countries with “monetary and financial sovereignty” and calls for “the elimination of the U.S. dollar in regional trade.”

This is a first step, official sources said, towards the future creation of a common currency that Morales suggested be called the pacha, which means “land” in the Quechua Indian tongue.

They also agreed on principles that would allow the nine ALBA countries to develop a Peoples’ Trade Treaty, or TCP, an initiative that calls for “fair, complementary and mutually supportive” trade so that nations of the bloc can overcome their economic inequalities.

ALBA will also found the ALBAEXIM trade corporation for exports and imports, as a mechanism for balancing commerce and which will open stores in the different countries for their products.

In the political arena, Chavez said at the end of the meeting that the bloc is progressing towards the “exorcism of imperial doctrine” in their countries in order to “recover the liberating doctrine of Bolivar.”

In this area, the chief resolution was for ALBA to impose new trade and migratory sanctions on the government of Roberto Micheletti in Honduras, where the bloc demands the unconditional reinstatement of deposed President Manuel Zelaya.

The regional group also asked the Colombian government in its final statement “to reconsider the installation” of U.S. military bases and demanded that the territory occupied by the United States at Guantanamo be returned to Cuba.

ALBA reaffirmed its request that the U.S. economic, trade and financial embargo against Cuba end “unconditionally, unilaterally and immediately.”

The declaration of the 7th summit proposes the founding of a “Permanent Committee for the Sovereignty and Defense of the Bolivarian Alliance for the Peoples of Our America ALBA-TCP,” except for the islands, which belong to a “regional security system made up of countries of the eastern Caribbean.”

That committee has as its chief objectives the definition of a “combined strategy for comprehensive popular defense and the founding of a School for the Dignity and Sovereignty of the Armed Forces of the ALBA-TCP nations.”

In the statement, the countries of the group accuse “imperialism and rightist forces” in the region of having reacted “with the coup d’etat in Honduras and the installation of military bases in Colombia” to impede “the progress and growth of progressive forces and ideas in Latin America and the Caribbean.”

During the meeting, Chavez insisted that a “defensive military alliance” be created to face “threats from the empire.”

“Why not? Who can stop sovereign nations from forming a defensive military alliance and exchanging soldiers and officers and training and materiel and logistics?” Chavez asked.

On the subject of the environment, the Boliviarians decided that next December they will take a jointly agreed position to the summit on climate change in Copenhagen.

ALBA agreed as a novelty to study the creation of an International Climate Court to make “industrialized countries pay their climatic debt and effectively reduce their domestic hothouse-gas emissions.”

The bloc will promote within the framework of the United Nations a Universal Declaration of the Rights of Mother Earth to seek her preservation against the “wastefulness of the capitalist system.”

Morales proposed Saturday to his colleagues that, after their next summit scheduled for Dec. 13-14 in Cuba, they all travel together to Denmark to attend the climate change conference.