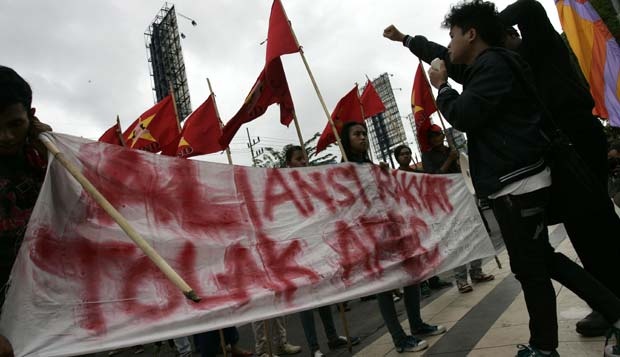 Asia-Pacific heads to hash out trade deal as clock ticks

Asia-Pacific leaders will seek momentum on talks for a sweeping 12-nation trade pact when they meet in Bali in coming days, trying to overcome concessions sought by countries that threaten to further delay completion.

President Barack Obama canceled plans to attend the Asia-Pacific Economic Cooperation summit due to the U.S. government’s partial shutdown, with Secretary of State John Kerry instead leading the U.S. delegation, White House spokesman Jay Carney said. The list of demands from parties to the talks, amid pressure to protect key industries, means the U.S. will be hard pressed to show progress.

Japan’s defense of its farming industry, Malaysia’s proposal to keep tobacco control measures out of the deal, and the impact of currency manipulation on markets are among issues impeding progress on an accord the U.S. calls the cornerstone of its economic policy in the region. At stake for member economies amid an uneven global recovery is the prospect of faster growth as their goods and services find new and bigger markets.

“Each country has its own different views and there will be a way forward, even if it’s a struggle,” said Hiroshi Imazu, a Japanese ruling party lawmaker who represents an agriculture-heavy constituency on the main northern island of Hokkaido. “If our views are not accepted, we can withdraw,” Imazu said.

Trade officials from the nations participating in the Trans-Pacific Partnership met in Bali today before the leaders summit. There have been 19 rounds of talks, and they will submit a status report to leaders, who have asked country teams to complete negotiations this year, the U.S. Trade Representative’s Office said in September.

“We have been told by the U.S. negotiating team that they are planning to hold the TPP leaders’ meeting as scheduled,” Japan’s Deputy Chief Cabinet Secretary Hiroshige Seko told reporters at the prime minister’s residence today.

Obama’s absence may add to growing anxiety in Asia that the U.S. is too preoccupied with internal political challenges to pursue its so-called “Asia pivot,” the president’s second-term foreign-policy priority designed to enhance U.S. standing in a region that’s adjusting to China’s economic and military emergence. As part of that push, the U.S. will base 69 percent of its naval fleet in the Pacific by 2020, up from about 50 percent.

The free-trade zone would link an area with about $26 trillion in annual economic output. Nations forging the Pacific accord are Australia, Brunei, Canada, Chile, Japan, Malaysia, Mexico, New Zealand, Peru, Singapore, the U.S. and Vietnam.

“The political will is very high, but like any trade agreement there are domestic sectors for and against the deal,” said Sanchita Basu Das, a fellow at the Institute of Southeast Asian Studies in Singapore whose research interests include trade policy. “They are about 90 percent done on the TPP, and it’s more feasible that we may see something in the first quarter of 2014. I’m not expecting much to come out from this week’s meeting.”

Delays in finalizing the agreement — the initial target was the Bali summit — could exacerbate the effects of a slowdown in China and India that is reverberating across the region, with the Asian Development Bank lowering its forecasts for growth this year and next. The road to a “robust and comprehensive” recovery remains bumpy, International Monetary Fund Managing Director Christine Lagarde said this month.

“The TPP will be beneficial when growth is slow,” said Eduardo Pedrosa, secretary-general of the Pacific Economic Cooperation Council in Singapore.

All the TPP countries are members of APEC, set up in 1989 to advance free trade and investment in an area that accounts for half of the world’s total gross domestic product and 45 percent of global commerce.

The TPP could yield global annual gains of $295 billion by 2025, according to estimates by Peter Petri and Michael Plummer in a June 2012 policy brief published by the Peterson Institute for International Economics.

“Good trade agreements typically force some changes in policy, but at the same time open up new commercial opportunities,” New Zealand Trade Minister Tim Groser said in a speech at the National Press Club of Japan in Tokyo on Sept. 27. “TPP will be no exception.”

In the way of TPP negotiators are millions of small farmers in Japan, who oppose any deal that might undermine protection for meat, wheat, sugar, dairy and goods like rice, which has a tariff of 778 percent. Japan became the latest nation to join the talks when it formally entered discussions in July.

Japanese negotiators have offered to eliminate tariffs on 92 percent of products, possibly including some sensitive agricultural goods, the Nikkei newspaper said today without saying where it got the information. Chief Cabinet Secretary Yoshihide Suga told reporters in Tokyo today that “there is no truth to that whatsoever.”

U.S. automakers have expressed concern about Japan’s economic policies and said the TPP should include provisions to prevent currency manipulation. The American Automotive Policy Council, an industry group that represents Ford Motor Co., General Motors Co. (GM) and Chrysler Group LLC, has said it won’t support the TPP unless it contains a currency provision.

“Failing to address currency manipulation in the TPP would mean U.S. companies and workers will end up paying dearly for expanded trade in the Asia-Pacific region,” Scott Paul, president of the Alliance for American Manufacturing, said last month.

Vietnamese Prime Minister Nguyen Tan Dung has said the U.S. will give the nation “differential” treatment in negotiating the accord. Other members should be flexible and take into account the low level of development of Vietnam, Dung said in a Sept. 27 interview.

In Malaysia, reluctance to change policies that favor ethnic Malays and indigenous people for some state contracts were among issues that led to a previous breakdown in negotiations with the U.S. on a free trade pact, alongside the U.S.’s decision to review its overall stance on bilateral deals. The Southeast Asian nation said in August it will review the costs and benefits of joining the TPP.

China, the second-biggest economy among APEC members, is not a member of the TPP. The country may not yet be ready to implement the types of obligations currently negotiated in the accord such as labor laws, increased transparency in economic activities and environmental regulations, Das of the Institute of Southeast Asian Studies said.

Chinese officials last month inaugurated a new free trade zone in Shanghai as the country experiments with loosened capital controls and other reforms to sustain growth. The 11-square-mile area is a testing ground for free-market policies that Premier Li Keqiang has signaled he may later implement more broadly.

“Within the Shanghai Free Trade Zone or other similar arrangements, a more efficient and open business environment could also pave the way to potential access to multilateral trade agreements such as TPP one day,” Morgan Stanley economists led by Helen Qiao said in a research note last month.

Li will attend meeting with leaders of Association of Southeast Asian Nations later this month and will also make visits to Thailand and Vietnam, China’s Ministry of Foreign Affairs spokesman Qin Gang said today in a statement on its website.

In Asia today, the Philippines reported inflation accelerated in September, while Malaysia’s exports grew more than economists estimated in August. The Bank of Japan refrained from adding to unprecedented monetary stimulus after business confidence surged and Prime Minister Shinzo Abe decided the economy was strong enough to weather a sales-tax increase.

Europe’s producer prices probably fell in August from a year earlier, a Bloomberg survey showed. Iceland is due to release its trade balance for September.

As negotiations on the Trans-Pacific Partnership continue, other challenges are yet to come, Das said.

“All the voices that you hear now are going to be even louder when it comes to the ratification process in the parliament of each country,” she said. “That’s the crucial time for the TPP.”

To contact the reporter on this story: Shamim Adam in Singapore at [email protected]