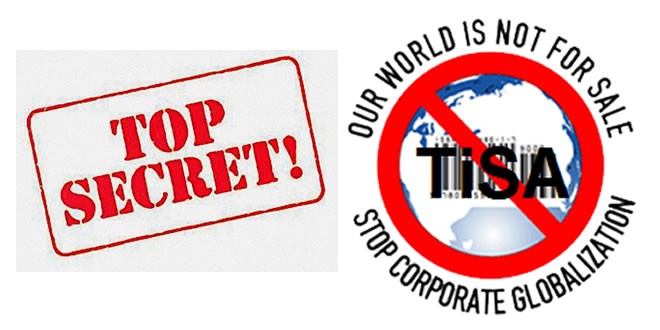 Backdoor for Investor-State Disputes in TiSA

Wikileaks’ release of the latest round of negotiations for the Trade in Services Agreement reveals that it is unlikely to have an investor­-state dispute settlement mechanism. However, there is still a loophole that may allow private investors to bring a dispute against states. This is particularly concerning in regards to services sectors that are socially sensitive yet require a significant level of economic investment such as the supply of communication, energy and transport.

The Trade in Services Agreement (TiSA) is a services-only trade agreement currently being negotiated by the US, the EU, Australia and 20 other nations. Its goal is to increase foreign market access for the participants’ services sectors. The agreement has an incredibly broad scope, with the parties accounting for around 70 per cent of the global trade in services. Negotiations are set to be concluded by the end of 2016 and are being conducted in secrecy, as is common practice for such agreements.

Last month, Wikileaks released the content of some of the discussions from the June and July 2016 negotiating rounds. This was just before the most recent round of TiSA negotiations in Geneva on 19-25 September. Remarkably, the leaks showed that the EU proposed a draft chapter on dispute settlement that does not include an investor-state dispute settlement (ISDS) mechanism.

The EU proposal adds yet another layer to the international trade dispute resolution framework for the parties to TiSA. Under the EU proposal, a complainant can choose to challenge a governmental regulation under either the World Trade Organization (WTO) or another existing free trade agreement (FTA) if the substance of their rules is the same.

It means that even if the TiSA dispute resolution system nominally bars foreign investors from bringing disputes against governments, a private investor may choose to initiate a dispute for any breach of TiSA rules that affects their foreign investment rights under a separate applicable bilateral investment treaty. In other words, foreign investors can still use the ad hoc international tribunals of investment arbitrators to claim that such breaches violate their ‘legitimate expectations of fair and equitable treatment’ (the common formula to initiate investor-state disputes).

Can the ISDS backdoor be closed?

The definitive issue regarding ISDS and TiSA is not in the dispute settlement chapter, but is in the still undecided sections on most favoured nation (MFN) treatment and on domestic regulation. The MFN rule is a WTO basic principle and essentially a ratchet clause to harmonise overlapping trade agreements. It is designed to ensure that each WTO member treats all others the same way as their favourite trading partner.

TiSA members are deeply divided on the application of the MFN rule because of its domino effect on the rest of the agreement. If TiSA adopted a full MFN obligation without limitations, it would mean that any better treatment given to any other country would have to be automatically granted to all other TiSA members as well. This would open the door for the claims of foreign investors against governments that adopt TiSA provisions limiting the application of a bilateral treaty in a service sector, even if only indirectly.

At the other extreme, if TiSA excluded the MFN rule altogether, governments would retain control over its scope of application, contradicting the very reason for TiSA, which is to exceed the WTO General Agreement on Trade in Services (GATS) liberalisation of trade in services.

Looking at the leaked TiSA text, only Colombia has openly raised the issue of the ISDS backdoor and will propose a different text modeled on the WTO-GATS Article XXIII:3, which would essentially keep any investment-related dispute within the domain of the TiSA. Even if the TiSA members were sensible enough to agree to the Colombian solution, the ISDS backdoor would still be open thanks to the controversial issue of domestic regulation.

In previous TiSA leaks, domestic regulation formed a wide-ranging separate annex, however the latest leak shows a much narrower domestic regulation article within the core text of the agreement. This probably reflects the long-standing aversion of the US for the cross-referencing of domestic regulation in international agreements. The US approach is in stark contrast with that of the EU, Australia and New Zealand, who typically promote stronger international restrictions on how governments regulate technical standards, professional qualifications and licensing requirements for the supply of services. For the time being, TiSA members only agree to vaguely recognise their territorial right to regulate the supply of services in order to meet their policy objectives.

For example, in Australia the leading telecommunication company, Telstra, receives A$297 million per year of public funds (partially raised from levies placed on the revenues of Telstra’s competitors) to provide basic services to all people in Australia on an equitable basis, wherever they work or live, and whatever disability or special needs they have. The Telstra example shows how the limited cross-reference to domestic regulation in combination with unlimited MFN obligations may easily leave the door open to ISDS mechanisms in TiSA. This is particularly concerning in regards to services sectors that are socially sensitive yet require a significant level of economic investment, such as the supply of communication, energy, and transport.