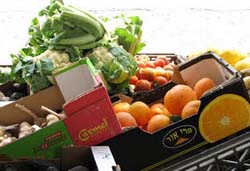 Ban on settlement goods wouldn’t break EU lawsIsraeli settlements in the occupied West Bank are illegal under international law. This is a fact, accepted by most countries in the world, so prohibition of trade with these settlements - distinct from a ban on Israel proper - might seem like a no-brainer. Such a ban is generally considered less contentious, and there is a substantial movement even within Israel to boycott goods made over "the Green Line".

But despite agreeing that settlements are illegal, there has been concern among European Union officials that it could be a breach of European or global trade law for member states to ban imports of settlement produce, or prohibit banks from financing settlement business.

That could all be about to change, after a new report has suggested that states would be fully within their rights to implement such a ban. The report, by Cambridge law professor James Crawford, says that "there do not appear to be any EC laws which could be breached by a member state taking the decision to ban the import of settlement produce on public policy grounds."

Contradicting the received opinion that a ban on trade with settlements could breach World Trade Organisation obligations, he points out that "as a matter of international law, the West Bank and Gaza cannot be considered to be Israel’s territory". On this basis, Crawford says, EU member states that wish to block the import of produce from settlements would be backed up by the EU’s Association Agreement with Israel, which says that the agreement "shall be based on respect for human rights and democratic principles".

So what does all of this mean? Firstly, it is unlikely that this will lead to an all-out ban on settlement goods among EU countries, which the Irish government has called for. Crawford’s advice - which runs to 60 pages - makes it clear that member states are not actually obliged to enforce a ban, although they are within their rights to do so. However, it should remove barriers for those states considering a ban, and will add force to those - such as the Trade Union Congress - lobbying for a boycott of settlement goods.

It is also worth noting that while members of the European Parliament have called for action on settler produce, banning all trade is not the only possible course of action. Britain has so far led the way on labelling that makes it clear when goods are from settlements (rather than from inside Israel), but has yet to bring in a ban. Denmark, Sweden and South Africa are all considering following the UK lead on labelling. This, at least, would go some way towards stopping the practice of labelling settler produce as "made in Israel" to get EU trade perks. It would also allow discerning consumers to make an informed choice about the goods they purchase.

While the issue of cultural boycott is fraught with ethical difficulties, and many feel discomfort with a broader economic boycott of Israel, a ban on trade with settlements is far more cut and dried. Indeed, it is more difficult to make a convincing argument for continuing trade than for ending it. This is implied in Crawford’s report, which suggests that states (as opposed to private companies) which provide financial support directly to settlements, through buying produce, or through other means, could be liable under international law.

Ultimately, this report should remove some of the barriers to implementing a ban, but as we have seen, that doesn’t mean that action will be taken. The next step is up to individual states and, quite likely, consumers within those states.