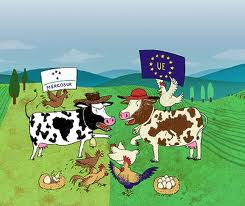 The Polish Commissioner, tasked with the internal market, industry and entrepreneurship portfolio, met with the Argentine leader to speak about boosting relations between the two blocs, presidential sources told EFE.

Argentina is seen as one of the EU’s most accommodating partners in the South America trade bloc, after it elected pro-business President Macri this time last year. The former civil engineer has set the brokering of an EU/Mercosur deal as a one his government’s main priorities.

The aim of the “formal meeting” had been previously set out by the European delegation as being to “facilitate European companies to revitalise their production structures with commercial ties with their Argentinian counterparts, deepening investment and technology transfer”.

Bieńkowska used her time with Malcorra to discuss a date for Macri’s forthcoming visit to Brussels, which the EU hopes will accelerate the Mercosur talks, which were relaunched in 2010.

The European delegation also included a number of business representatives from the energy, telecommunications, banking, food processing and metalworking sectors.

The EU is currently negotiating a trade agreement with Mercosur as part of the overall negotiation for a bi-regional Association Agreement which also cover a political and a cooperation pillar.

Mercosur is composed of Argentina, Brazil, Paraguay, Uruguay and Venezuela, while Bolivia is in the process of accession.

The objective is to negotiate a comprehensive trade agreement, covering not only trade in industrial and agricultural goods but also services and establishment and government procurement, and the improvement of rules inter alia on government procurement, intellectual property, customs and trade facilitation, and technical barriers to trade.

The EU is Mercosur’s first trading partner, accounting for 20% of Mercosur’s total trade in 2013. EU-Mercosur trade in that year was €110 billion.