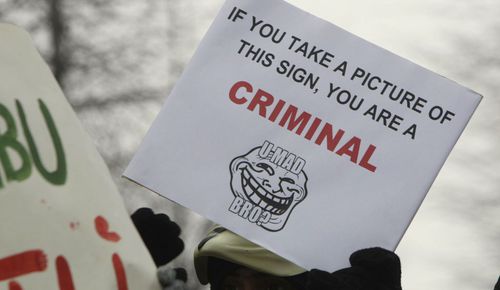 A protestor holds a sign during a demonstration against ACTA in Riga on February 13. Photo: Reuters

Bulgaria will not take any steps to ratify the Anti- Counterfeiting Trade Agreement, known as ACTA, and “practically stops its participation” in it until there is a clear European Union position on the pact, which seeks to curb online theft of copyrighted materials, Economy and Energy Minister Traicho Traikov said today, adding that he expects the Cabinet to back his proposal tomorrow.

“I’m a pessimist when it comes to regulating an industry, which hasn’t adapted to the digital age, through sanctions rather than market means,” Traikov told reporters in Sofia today. “Authors’ copyrights should not be placed above human rights.”

Thousands of protesters marched in Sofia and other European cities including Berlin, Warsaw and Paris on Feb. 11 to campaign against Internet surveillance and jail terms envisaged in the accord to prevent free online exchange of music, movies and books.

The U.S., Australia, Japan, Canada, Korea, Japan, New Zealand, Morocco, and Singapore signed the accord, which outlines civil and criminal actions that signatory countries pledge to enforce against entities that violate intellectual property rights. It lays out procedures to strengthen cooperation among customs authorities and creates an international body to oversee implementation of the agreement.

Bulgaria’s signed the agreement with 21 other EU countries on Jan. 26 in Tokyo. Germany, Slovakia and Estonia are among the EU members that didn’t sign the pact, while Poland and the Czech Republic have stopped its ratification, Traikov said.

“We see a radical change in the attitude to this agreement in the EU,” Traikov said. “There’s lack of unanimity. Bulgaria won’t take any action in regard to implementing ACTA, including ratification, until there is a unified position of all EU states.”

German Justice Minister Sabine Leutheusser-Schnarrenberger is seeking clarity from the European Commission on the legal implications of ACTA before she signs off on the planned international agreement, the Passauer Neue Presse newspaper reported yesterday.