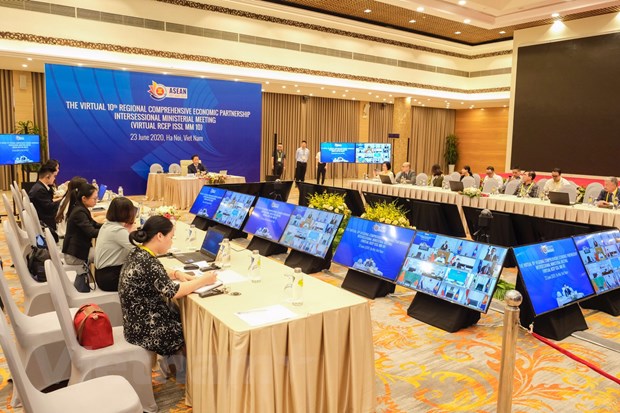 The Commerce Ministry will ask the cabinet for approval to sign the Regional Comprehensive Economic Partnership (RCEP) in October, one month ahead of the pact’s official scheduled signing in Vietnam.

Ronnarong Phoolpipat, the Commerce Ministry’s chief inspector-general, said last week that the signatory countries have completed their scrubbing of the legal text for all 20 chapters of the pact.

"Our goal is to complete all the talks within August, submit the proposal for the cabinet’s approval in October and have an official signing in November at the Asean Summit in Vietnam," said Mr Ronnarong, also the chief negotiator of the RCEP for Thailand.

The 20 chapters include provisions for trade in goods, rules of origin, customs procedures, sanitary measures, e-commerce, small business, government procurement and dispute settlement, among other details.

Mr Ronnarong said the RCEP is not only the world’s largest trade pact — engaging more than 3.6 billion people or nearly half the world’s population — but also an agreement that generates no negative impact on member countries.

The rules and regulations of the RCEP have been designed to comply with each member’s requirements, he said.

After the RCEP takes effect, within 3-5 years the pact can be upgraded or revised to accommodate more products among country members, as well as rule changes, non-tariff barriers, dispute settlements and recruitment of new members, Mr Ronnarong said.

The RCEP is a proposed trade agreement of the 10 member states of Asean and six dialogue partners: China, Japan, South Korea, India, Australia and New Zealand.

Negotiations on the RCEP started in late 2012 at the 21st Asean Summit in Phnom Penh.

In last-minute talks on Nov 4, 2019, with Thailand as Asean chair, India baulked at joining the RCEP over unresolved issues, especially those regarding agricultural tariffs.

India later announced it would not join the pact at this year’s Vietnam summit, citing concerns that the deal could hurt the livelihood of its most vulnerable citizens and lead to a rising trade deficit and a flood of imports, especially cheap goods from China.