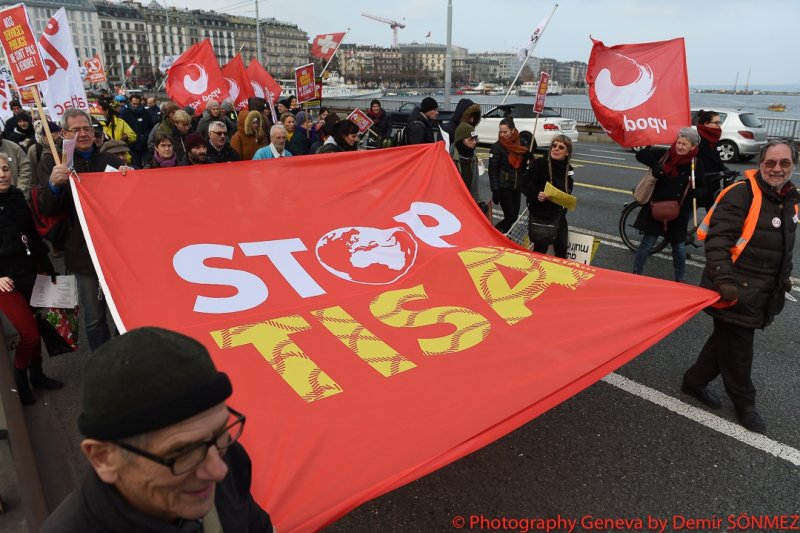 The new project enlists the power of trade unions to fight back against the deal, which has been negotiated in virtual secrecy by the European Union and 22 other countries. One of its core aims is to definitively prove the danger to rights, conditions and democracy posed by TiSA, in order to provide the information needed to oppose it. All the information will now be findable in one place: www.tisameanstrouble.org.

Unveiled at the site is the latest research into the effects of TiSA on transport workers, commissioned by the ITF and the Friedrich-Ebert-Stiftung (see the full report here or the executive summary below), along with leaflets, a poster and more information.

ITF president Paddy Crumlin commented: “TiSA would supercharge the most powerful companies in the transport industry, giving them preferential treatment. What’s missing from this equation is any value at all for workers and citizens. It creates serious barriers for any state wanting to invest in, manage and operate its national infrastructure or – crucially – to defend decent work and decent terms and conditions across transport. It is our duty as trade unionists to build the knowledge and alliances needed to challenge the secrecy and lack of democracy involved, and develop realistic, worker-centred alternatives.”

ITF general secretary Steve Cotton stated: “Despite the wall of secrecy constructed around the TiSA talks, it’s well known that the deal represents a threat to hard-won workers’ rights and conditions. But what isn’t so well known is the way it directly threatens transport workers’ jobs. We aim to put that right. At the moment negotiations are suspended pending the scheduling of a new round of talks. That gives us a one off window of opportunity for a hard-hitting informational campaign to help challenge this unrepresentative and undemocratic deal.”

The ITF’s case against TiSA can be found at www.tisameanstrouble.org, along with campaign materials, leaflets and the new research report The trouble with TiSA: the Trade in Services Agreement and how it threatens transport workers’ jobs. This is the report’s executive summary:

The International Transport Workers’ Federation (ITF) is a global trade union federation. The rules that govern the global services market shape the daily lives of its affiliated unions and their members. The Trade in Services Agreement (TiSA) has the potential to dramatically change that world. The negotiations are currently paralysed. This is the time for the ITF and transport workers everywhere to make their voices heard.

TiSA and the fourth industrial revolution

What TiSA aims to do

The ITF’s transport and delivery sectors

1. As well as TiSA’s general impacts on national and global economies, some annexes specifically target the post and courier, maritime, air and road transport sectors. Their goals reflect the demands of the big industry lobbies: