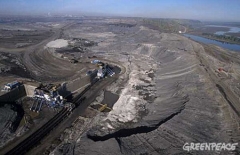 By The Council of Canadians

The Harper government is using the Canada-European Union trade talks to lobby the EU on its climate policy, according to recently released briefing notes.

But the connections between the proposed agreement and needed regulation of the tar sands doesn’t end there.

The Council of Canadians, the Indigenous Environmental Network and Friends of the Earth Europe commissioned a legal opinion on the impacts that the Canada-European Union Comprehensive Economic and Trade Agreement (CETA) will have on the pace and character of tar sands development.

The opinion states that, as written, CETA would make European and Canadian climate policy vulnerable to state and corporate trade challenges.

“What kind of trade deal is this if the goal is to stop the EU from adopting effective climate policy?” asks Maude Barlow, national chairperson of the Council of Canadians.

"The Harper government is clearly obsessed with expanding tar sands production at any cost and it will bully any country that tries to stand in its way. If this is Canada’s trade agenda, then we desperately need to put the Canada-EU trade talks under a microscope and make them public."

The legal opinion notes that the EU and its parliament are in favour of using trade to strengthen climate policy in partnering countries, but that Canada’s track record shows it will use trade agreements to undermine environmental policy.

Canada has resisted EU efforts to include a climate chapter in CETA, which would include recognition of commitments in multilateral environmental agreements.

Copies of the opinion were distributed to members of the European Parliament’s trade committee during a recent visit by the Council of Canadians, the Indigenous Environmental Network and the Trade Justice Network during CETA negotiations in January.

“We welcome the news that the EU remains committed to assigning tar sands a specific value under the proposed Fuel Quality Directive,” says Andrea Harden-Donahue, Energy and Climate Justice Campaigner with the Council of Canadians.

“But we remain very concerned that the Harper government uses trade deals and these CETA negotiations to challenge sound public policy that seeks to limit environmental harm."

The legal opinion outlines that the likely inclusion in CETA of an investor-state dispute process is a danger to environmental policy in the EU and Canada.

This process will allow EU-based oil companies invested in the tar sands to invoke international arbitration to recover monetary compensation in the event future Canadian or European policy interferes with their right to establish and expand their operations in the Alberta tar sands.

Likewise, Canadian companies would be able to take otherwise legitimate and legal EU decisions before non-transparent arbitration panels with the power to impose fines and penalties.

“The Harper government has absolutely no concern about the climate crisis and it uses trade deals to discourage effective climate policy abroad,” says Stuart Trew, Trade Campaigner with the Council of Canadians.