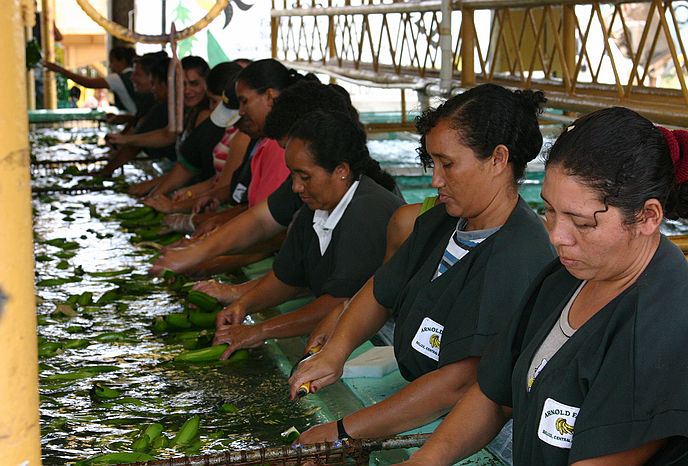 Women in Belize sorting bananas and cutting them from bunches (Wikimedia)

PORT OF SPAIN, Trinidad, Apr 8, 2010 (IPS) — When Caribbean leaders sit across the table from their European counterparts at a May summit in Spain, high on their agenda will be the problems experienced by banana and sugar producers in gaining meaningful access to the European market.

Following a meeting in Dominica on Mar. 12, Caribbean leaders noted that the market access concessions on bananas and rum, granted by Europe in pending free trade agreements with Colombia and Peru, will pose serious challenges for Caribbean countries.

However, former University of the West Indies professor Vaughan Lewis, who chaired a working group on the Governance of the 15-member Caribbean Community (Caricom), told IPS that, "We were put on warning that the access for these commodities would change."

"I myself do not believe that we have ourselves worked out what the infrastructural requirement for creating new mechanisms of economic growth should be. We are still depending in a sense on negotiating assistance for the old agricultural products, sugar rice, bananas and so on," he said.

By the time the May 17 summit begins in Madrid, he said, the Europeans are hoping to have concluded deals with Peru, Colombia and Central America.

"However, to achieve this, the European Commission has made new trade concessions to these nations on sugar, rice, bananas and rum that may well provoke a Caribbean protest as this new deal comes shortly after Europe, Latin nations and the ACP (African, Caribbean and Pacific group) had reached in good faith a finite trade agreement on these and other products, albeit in a multilateral context, in Geneva," Jessop wrote in his weekly newspaper column.

The EU says the overarching objective of its development strategy is to help all the Caribbean countries achieve their long-term development goals in a self-sustaining manner and join the ranks of the developed states by 2020, when the current Cotonou Agreement ends.

It concedes that to varying degrees, Caribbean countries remain vulnerable to both economic and natural shocks and face common socio-economic and environmental challenges.

"Countries such as Haiti, Guyana and some OECS (Organisation of Eastern Caribbean States) countries face significant poverty, unemployment, migration and brain drain, a high rate of HIV/AIDS, high levels of indebtedness and the need for economic reforms and for a restructuring of the public sector," according to an EU document entitled "An EU-Caribbean partnership for growth, stability and development".

Lewis acknowledges the position of the EU in helping the Caribbean become more competitive internationally, but adds, "We have not really pushed the European Union on the question of effective assistance for regional and economic integration, partly because we ourselves have been slow in deciding on the implementation of the (Caricom) single market and economy."

"For most of the ACP countries - and for virtually all African ACP countries - the EU is the main trading partner. So, trade between the ACP and the EU has remained important for the ACP, but marginal for the EU," the EU says on its website, adding that the relative importance of the ACP as a destination for investment has increased.

The EU is also the largest donor of development funding for the Caribbean. Its grant flows of some 785.8 million dollars per year exceed those of the United States.

But many observers say that over the past decade, real income for the Caribbean countries has declined significantly, with high unemployment and growing poverty. Many Caricom countries now have debt levels of over 100 percent of their gross domestic products, prompting Guyanese President Bharrat Jagdeo to warn last week that the Caribbean is "on the verge of bankruptcy".

"Having conceded the opening of key areas of their economies to the EU under an Economic Partnership Agreement (EPA) signed in 2008, the regional countries have no chance of bargaining for more advantageous conditions in the WTO," he said, accusing the EU of "holding a gun at the heads of Caribbean governments to either sign or have higher tariffs placed on their key exports".

In February, former Barbadian prime minister Owen Arthur warned that the EPA, which comes into effect next year, will peel away the common external tariff as a device protecting Barbadian goods to the rest of the region.

"European goods will not only enter duty-free but will be less expensive than in the past. The likely effect will be a switch from Barbadian goods to cheaper European imports," he said.

It is a situation that is likely to be repeated in other Caribbean countries.

The Europeans defend the EPA as a reciprocal trade agreement which succeeded the non-reciprocal preferential trade regimes, such as the Lomé accords that governed Euro-Caribbean trade for decades.

Under the agreement, the EU allows CARIFORUM (CARICOM and the Dominican Republic) countries duty- and quota-free access to its market in all goods and services, with CARIFORUM agreeing to open 80 percent of its market to the Europeans.