Several EU-flagged vessels have blatantly ignored and violated the EU Court judgment invalidating the EU-Morocco fish agreement in Western Sahara. Here they are.

Images below are collected from the website Global Fishing Watch

"At the present, no EU fishing vessel can operate legally under the EU Agreement with Morocco in waters adjacent to Western Sahara", said Vincent Piket, Head of the Maghreb Division of the EU External Action Service in a seminar on EU-Morocco relations, hosted by the ALDE group in the European Parliament on 25 April 2018.

Two months earlier, the Court of Justice of the European Union (CJEU) had concluded that the EU-Morocco Fisheries Partnership Agreement could not be applied to Western Sahara. Western Sahara, the Court stated, does not fall under Moroccan “sovereignty or “jurisdiction”, and is not part of “Moroccan fishing zones” – a notion used throughout the Agreement and its implementing Protocols.

Western Sahara Resource Watch has monitored the fisheries practices in the territory since that ruling and can affirm that the vessels below have gone on to fish in the waters off occupied Western Sahara after the EU Court had ruled on the matter. The graphics below - taken from the website Global Fishing Watch - show images of several Spanish vessels clearly fishing in the Western Saharan waters, while several other vessels - French, German, Danish and Spanish - fishing on both sides of the maritime boundary between Mauritania and Western Sahara.

The Catrua, fishing in the southern part of the waters adjacent to Western Sahara, between 25 June and 7 July 2018. The vessel seems to call into the port of Dakhla, and that of Nouadhibou (Mauritania). 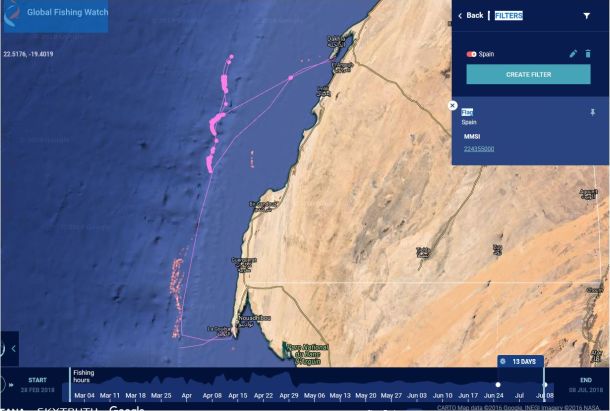 The Curbeiro, fishing off La Güera, on the southern tip of Western Sahara, in June 2018.

The Isla De Santa, making repeated trips to the port-area of Dakhla, after having fished further south in Western Sahara, in June 2018.

The Mercedes Quesada, fishing in the southern parts of Western Sahara, and making calls into the Dakhla port area, in June 2018.

The Balamida, crossing the maritime border between Mauritania and Western Sahara, displaying fishing patterns in the waters of Western Sahara post 27 February 2018.

The Hermanos Delgado fishing in Mauritania, yet making a quick trip north into the waters of Western Sahara, post 27 February 2018.

French-flagged vessel Cap Mauritanie 1 making a fishing trip exclusively north of the maritime boundary between Western Sahara and Mauritania, in the third week of July 2018.

The following two images show the Danish-flagged Monsun. The first image displays a fishing trip the vessel undertook just last week, crossing the maritime boundary with Mauritania into Western Sahara. The second image reveals that this is not an isolated incident, as is evident by the vessel’s fishing patterns post 27 February 2018 which regularly cross into Western Sahara. 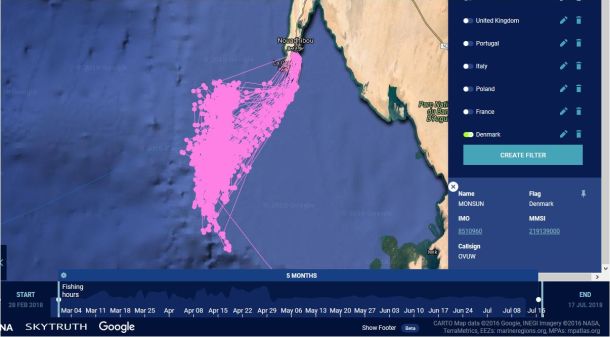