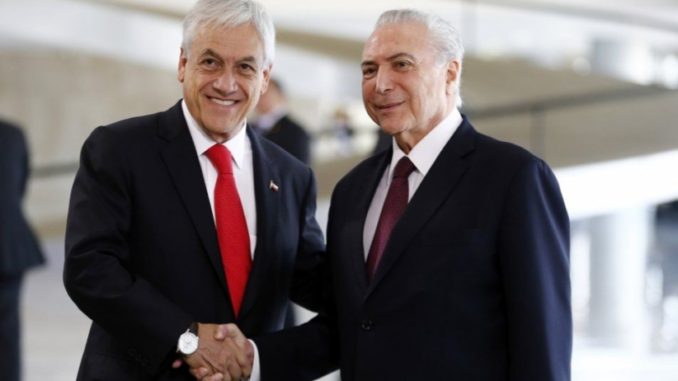 Chile and Brazil move forward in negotiations for a new FTA

SANTIAGO – Until Friday (October 19) the teams of Chile and Brazil working on a new Free Trade Agreement between the two countries will meet in Santiago.

The negotiations will be led by Felipe Lopeandía for Chile while Michel Arslanian will do it for the Brazil in what could be the last of the bilateral rounds to have a finished document.

It was last April that President Sebastián Piñera and his Brazilian counterpart Michel Temer agreed to carry out a renewed FTA. As it has transpired, the subjects of: SMEs, telecommunications, cooperation, gender, good regulatory practices and global value chains have been agreed upon. However, there would still be other issues to be addressed, such as sanitary measures, trade facilitation, labor standards and electronic commerce.

Regarding the future and the political changes in Brazil, from Chile it is understood that the treaty goes beyond a political situation in the country led by Temer. “Bolsonaro will have more problems to approve local reforms, so international issues, such as an FTA, should be easy parliamentary dispatch.”

If Fernando Hadadd, the candidate of the Workers Party, is elected, “it will not radically change Brazil’s course and fiscal imbalances could continue to deepen,” they stress. However, Bolsonaro, who was in pole position after the elections on Sunday, October 7, is known to be an economic liberal (thanks to his strong man in the numbers Paulo Guedes) and seek to open the commercial borders of Brazil and property of state companies.–MercoPress