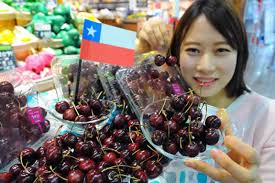 An array of Chilean wines, marinated roast pork belly on sour cabbage, empanadas and chorrillana greeted guests as they joined a buffet dinner as a part of the reception for the 209th anniversary of Chile’s independence.

The Chilean food and beverages were available because of a bilateral free trade agreement (FTA) signed in 2003.

This event was the first of its kind between and Chile and an Asian country, and to deepen the bilateral historic economic partnership, negotiations are underway to update the FTA.

"Our trade links are based on our bilateral free trade agreement … Conscious of the importance of our free trade agreement, Chile and Korea are now dedicated to its updating," Chilean Ambassador to Korea Fernando Danus said during the reception at the Millennium Hilton Seoul hotel in central Seoul, Sept. 18.

Since 2003, bilateral trade volume increased by 10 percent every year on average.

The major trade items vary from copper, which Danus called "a substantial part of our exports," to pork, seafood, fruits and wines.

The ambassador referred to Antarctica as another area for cooperation, saying "Chile looks upon Korea as a friend and a trusted partner."

The reception attracted other ambassadors and members of the diplomatic corps.

From Seoul’s Ministry of Foreign Affairs were Deputy Minister for Multilateral and Global Affairs Kang Jeong-sik and Director-General for Latin American and Caribbean Affairs Jo Yung-joon.

Deputy Minister Kang noted wines and other Chilean imports show distance is "no longer an obstacle to friendship and cooperation."

He added, "Today, Koreans feel much closer to Chile, well-known as a charming country blessed with a great variety of climates and wonderful natural environments."

In April, Chilean President Sebastian Pinera made a state visit to Seoul. He was the first leader of a Latin American country to visit Korea after President Moon Jae-in began his term in May 2017.

In November, President Moon is expected to visit the Chilean capital of Santiago on the occasion of the 2019 Asia-Pacific Economic Cooperation (APEC) summit.

Chile has supported Korea’s bid to become an associate member of the Pacific Alliance, a Latin American trade bloc launched in 2011.

Chile, Colombia, Mexico and Peru are the alliance’s full members. Korea is among more than 50 observers to the alliance, with Australia, Canada, New Zealand and Singapore being associate members.

The Chilean Independence Day marks the beginning of independence movements from Spanish rule in 1810.

The country fully won independence in 1818.