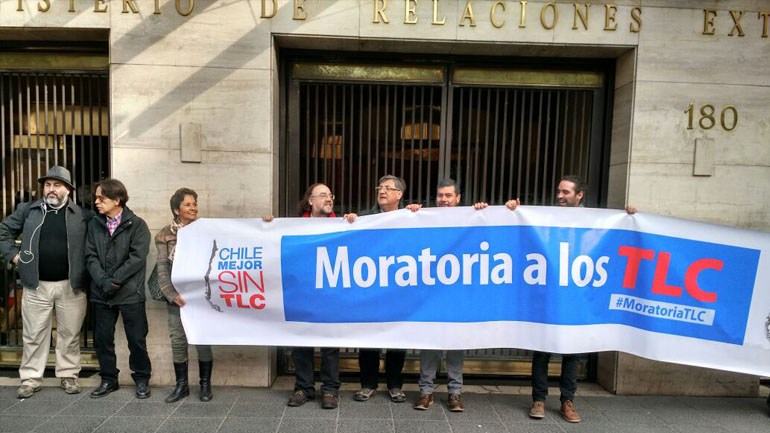 A few days before Chile’s presidential elections and in the middle of its Constitutional Convention, the Undersecretary of International Economic Relations (SUBREI) of the Government of Chile has publically announced that the negotiations to modernise the Association Agreement between Chile and the European Union have been finalised.

As Chile Better without FTAs (“Chile Mejor sin TLC”) we maintain that, in the first place, this public notice is at least misleading in its wording. While the technical negotiation of the accord has been concluded, there is no political agreement within the European Union to support the conclusion of the talks.

Secondly, we accuse the Chilean government’s SUBREI of open political manipulation, since the technical conclusion of the negotiations in no way implies that no changes can be made to the modernisation of the agreement.

That said, one of the countries accused of blocking the modernisation of the deal is France, whose position is based on opposition to the treaty from its own agricultural sector. Just as in Chile, the fierce defence of seeds and the struggle for food sovereignty has been a barrier to the deepening of privatisation and dispossession in Europe. Farmers there are resisting this treaty, as it would affect many of the rights they have won.

The signing of this modernisation of the agreement means the establishment of an Investment Court System, a system that gives international investors the unilateral right to sue states whenever their decisions interfere with their profit expectations, giving them the possibility to demand millions of dollars in compensation. This court, whose jurisprudence will be above that of national courts, will extend guarantees to foreign investors for more than 20 years after an eventual withdrawal of either party from the agreement.

We must remember that the European Union itself recognised that the modernisation of the economic agreement will cause environmental damage in our country and that the economic gains for Chile will be marginal. Likewise, different EU countries recognise that they are taking advantage of the current situation in Chile where President Piñera’s mandate to conclude the agreement will soon end, as they know that a new government will not be so willing to modernise this type of treaty.

We also affirm that this trade agreement that the authorities present as environmentally friendly and beneficial is, from the perspective of the people of Chile, totally lacking in these qualities. The EU countries, especially Germany, are very interested in approving the agreement, particularly in energy matters, as Chile would become an exporter of green hydrogen to them, assuring an energy transition for Europe but deepening extractivism in Chile.

Once again, the participation of civil society and Parliament in this process has been nil. The Chilean government’s negotiating team have announced the conclusion of this relevant public policy without any accountability to the public or to congresspeople. The country’s appreciation of free trade agreements has changed substantively and legitimately over the last five years, making it absolutely necessary to debate any international trade deal.

It is clear that in today’s political environment, with a president suffering the worst popular approval ratings in recent history, the government is neither in a position, nor has the authority, to try to impose an issue that is contentious.

We demand that the current authorities halt all negotiations or procedures of all free trade and investment agreements. We urge elected officials to thoroughly and democratically review each trade agreement and denounce those that are harmful and contrary to the dictates of popular sovereignty.

Finally, we call on social organisations to be attentive to what happens with the modernisation of the Association Agreement between Chile and the European Union, since it will contain aspects that have already been criticised in other agreements, such as the TPP-11.