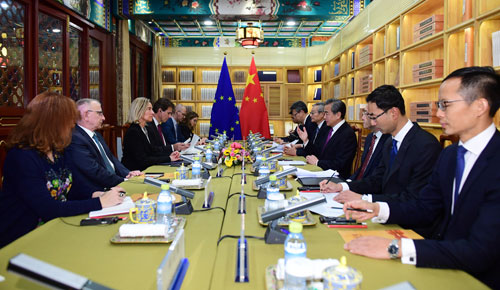 China calls for opening free trade talks with the EU

Chinese foreign affairs minister Wang Yi on Monday (16 December) called for the launch of free trade talks with the EU, in parallel with ongoing negotiations on an investment deal.

On an official visit to Brussels on Monday and Tuesday, Wang said that both partners should launch the feasibility study for a free trade agreement, which could take “one or two years” to prepare.

“We should seize the opportunity”, he said in an event hosted by the European Policy Centre. “I want to make the plea here.”

“Why aren’t you talking to your largest trading partner? I cannot understand,” Wang said. “Isn’t that a good thing for the European people? Why don’t you do it?”

The EU is China’s largest trading partner and China the EU’s second-largest market after the US.

A Commission official said that the EU’s focus was to deliver on the priorities already agreed in the last EU-China summit.

These include strengthening international rules, notably on industrial subsidies; concluding the negotiations on the investment agreement, and addressing market access barriers.

The process was launched in 2012, but is progressing at snails pace, though both sides are aiming to conclude the talks in 2020. A new round of negotiations will take place in January.

“We need to have faith about the prospects,” Wang added. He explained that the conclusion of the US-China trade talks was “good news” for Europe, given that more negotiators could dedicate time to the EU-China talks.

A high-level meeting between EU leaders and Chinese president, Xi Jinping in Leipzig in 2020 will also help to the talks as it will provide “input” to the talks, Wang said.

The EU is working with China to reform the World Trade Organisation, one of the top priorities for the Europeans in order to defend the multilateral system amid the tariff dispute launched by US President Donald Trump.

But the EU is also increasingly wary of China’s ambitions in the technology field and the unbalanced trade and economic relations with the member states.

Last March, the EU labelled China as a “systemic rival”, while it increased its pressure on Chinese authorities to open its markets and address the forced transfer of technology imposed on foreign firms.

Despite being the second-largest economy on the planet and a leading ‘tech’ superpower, Wang insisted that China is “indeed a developing nation”.

“It would be “irreciprocal” in effect to ask for reciprocity between a country that has been developing for only several decades and countries that have developed for centuries,” he said.

The Chinese minister argued that the cooperation between the two blocks “far outweighs” the competition. And the differences over the social systems and values should not become an obstacle in the bilateral relations.

In addition to the differences over trade and economy, human rights remain a bone of contention between the two sides.

The handling of the protests in Hong Kong and the situation of the Uyghur Muslim minority in China was raises by EU High Representative for Foreign Affairs and Security, Josep Borrell, when he met with Wang in Madrid on Sunday.

More than a million of Muslims have been arbitrarily detained in China’s Xinjiang province and sent to “reeducation” camps.

Wang said in Brussels that “the true value of the universality of human rights can only be realized when it is applied in the context of specific needs of different countries,” recalling that his country had lifted 850 million out of poverty.

Despite the outstanding differences, Wang invited Borrell to strengthen mutual cooperation, in particular, to uphold multilateralism and defend free trade.