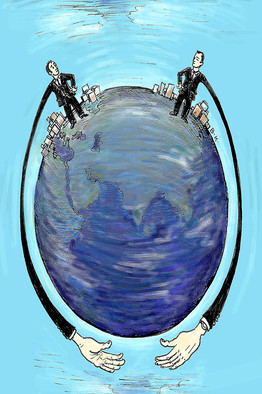 China and the European Union could start investment talks in the coming months, the Chinese ambassador to the EU said.

China has also submitted a proposal on launching a feasibility study on a free-trade agreement with the EU, said Wu Hailong, who is also a member of the National Committee of the Chinese People’s Political Consultative Conference.

"China and the EU are expected to initiate trade negotiations this year," Wu said.

"China is ready, and the EU is seeking approval from its 27 members on officially starting the talks," he said. "It is expected to get the authority by the end of April".

According to the Ministry of Commerce, China has signed investment agreements with more than 100 countries and regions. These include Germany and France.

The EU has been a top investor in China, and in 2012 the bloc’s investment reached $6.11 billion, the ministry said.

China’s investment in the EU has gained momentum since the financial crisis.

China’s investment accounts for just 2 percent of Germany’s total foreign investment, Shi said on the sidelines of the CPPCC.

Because of the debt woes, EU investment in China dropped by 3.8 percent year-on-year in 2012, while the nation’s FDI dropped by 3.7 percent.

But Wu said he is upbeat about the prospects.

"The EU economy may start to recover this year, and I believe China will see the region’s investment regain its momentum," he said.

As for any investment agreement, "talks will be complicated and arguments will arise over sensitive issues, including market access, government procurement and intellectual property rights", he said.

The EU and the US are in talks over the Transatlantic Trade and Investment Pact. China "believes the time is ripe to discuss free trade with the EU", Wu said.

The EU has signed more than 60 FTAs worldwide and is expected to wrap up talks with India before starting talks with Japan.