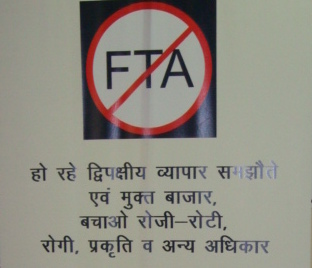 Last March, the country’s largest dairy co-operative better known for its popular Amul products had sounded caution on the proposed Free Trade Agreement between India and the European Union.

In a letter to the Congress-lead Government, the Gujarat Co-operative Milk Marketing Federation’s (Amul) Managing Director RS Sodhi had urged the Commerce Ministry to tread carefully when negotiating in the interest of Indian farmers at these trade discussions.

A different Government sits at the helm today, but similar concerns have been raised again, albeit by a different forum.

The yardstick to evaluate free trade agreements (FTA) should be based on gains in employment generation and sustainable development outcomes, the Forum against FTAs wrote to the Minister.

Their concern come against the backdrop of RCEP negotiations scheduled to start on Monday in Singapore, and the possibility that these negotiations could “deepen and broaden trade liberalization” beyond the scope of existing FTAs in the region. Apart from the trade in goods , the agreement could be expanded to include intellectual property rights, investments, services, competition etc, the forum said – indicating that India was over-committing on access to the local market, even as it opened itself up to tricky legal situations.

Recently, the Commerce Minister had said that FTAs were in fact being reviewed to assess if they had indeed achieved what they set out to do.

At present 16 governments, including 10 ASEAN countries, Australia, China, India, Japan, the Republic of Korea and New Zealand are involved in RCEP negotiations. And the door is open for others to join in.

The RCEP goes against the government’s efforts to revive Indian manufacturing, the letter says. It has the potential to permanently damage the Indian manufacturing sector “due to high degree asymmetry in manufacturing capabilities of China, Japan, South Korea and some of the ASEAN Member Countries compared to India. Therefore, India may not only fail to gain market access from RCEP but also bears the risk of acceleration of deindustrialization,” they said.

Amul’s Sodhi pointed out that they are not in favour of concessions that would lead to cheap imported dairy products flooding the local market. Next year, the quota imposed on farmers in the EU is expected to end and as their production increases, the surplus will be sent to markets like India, he cautioned.

But these are not isolated voices of concern from India, worrying about the far-reaching impact of FTAs on citizens. About three years ago, the Unitaid had expressed its concern on how trade agreements could impact India’s capacity to make affordable medicines for domestic and overseas markets. It could close the tap on affordable medicines, said the United-Nations- supported Unitaid, an international drug purchase facility.

India had pursued an aggressive FTA strategy without assessing the empirical cost and benefit analysis, the Forum said. This has led to increasing imports into India from ASEAN countries and other member countries engaged in RCEP negotiations.

Given the reduced policy space and increasing current account deficit, FTAs have the potential to cause a major crisis in the Indian economy, the forum said. “India has substantial negative trade balance with its FTA partners including ASEAN bloc and countries such as Republic of Korea and Japan. In addition the mammoth trade balance with current RCEP partners, $ -74,918.29 million in 2012-2013 and $ -63,705.72 million in 2013-14, raise significant alarm over rationale of RCEP’s benefit to India and its people,” the forum points out.

In fact, there have not been public consultations or a paper outlining the benefits and disadvantages of these agreements, the letter alleged, calling for greater transparency.