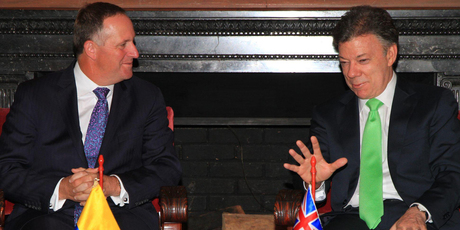 The chemistry between John Key (L) and President Juan Manuel Santos was a factor in the Colombians’ enthusiastic response to a trade agreement.

The smile on John Key’s face widened as broad as the sombrero that Juan Manuel Santos had just given him, when the Colombian President said, "We would love to have an FTA with New Zealand when they are ready to start negotiations."

Santos’ open enthusiasm for a bilateral free-trade agreement took Key and his officials by surprise during a news conference after their meeting at Bogota’s El Narifio Palace.

It was strong affirmation of the highly sophisticated approach the Key Government is taking to international relations and trade diplomacy.

In pre-meeting preparations it had been agreed not to overcook the planned announcement that New Zealand and Colombia would "prepare a strategic assessment regarding a New Zealand-Colombia comprehensive economic partnership". It rated a mere paragraph in Key’s press statement and was the fifth point in the joint statement issued by the two leaders after their meeting.

But Key’s own political advocacy during his meeting with Santos fell on receptive ears.

The Colombian President, who is highly impressive, smart and savvy, made his own decision to go well beyond the bounds of the agreed official press statement and openly show his enthusiasm for a New Zealand deal.

It is a mark of Key’s growing confidence in spearheading New Zealand’s international diplomacy that he inspired Santos to take a risk.

And a clear example of the differences political leaders can make when the personal chemistry is right, when they speak the same rational and business-minded language and are ambitious for their countries to succeed.

For Santos, it was a calculated gamble.

He is still waiting on the Colombian Senate to ratify a free-trade agreement with the European Union. Dairy lobbies were already having to be calmed down. Getting into bed with New Zealand would simply inflame things - or so the story went. But Santos clearly believes that his dairy farmers will benefit through investments and partnerships with New Zealand. And importantly said so.

But New Zealand has a lot to be proud of.

Both Santos and Mexican President Enrique Pena Nieto, whom Key met earlier this week, praised New Zealand’s role in a number of international forums. Both countries have now committed to support New Zealand’s bid for a non-permanent seat on the United Nations Security Council. And there is open commonality on the Trans Pacific Partnership negotiations - with Pena Nieto because Mexico is already at the table as the result of some clever behind-scenes footwork by Trade Minister Tim Groser and his officials, and with Santos because he believes notching a comprehensive and high-quality deal with New Zealand will burnish Colombia’s credentials to ultimately join Apec and the TPP.

In Santiago, President Sebastian Pinera also acknowledged Chile’s shared ambition for the TPP and the desire by himself and Key to have the deal pretty much in place by October this year.

The Colombian initiative is the upshot of a careful Groser strategy. Key’s foreign affairs adviser, Ben King, had convinced the PM and Groser last year that Colombia should be one of the countries on the Latin American swing. King - then based in Washington - had been impressed by the Colombians’ intent and prowess during negotiations on the US free-trade deal.

Key agreed, believing the fact that the Colombians were prepared to tackle tough issues like intellectual property showed they meant business.

Groser took a paper on the issue to the World Economic Forum in Davos in January and talked through the potential for an FTA with Colombian trade politicians. The upshot is that New Zealand is at the starting point with a rapidly growing Latin American nation that needs to post strong returns to continue to weaken the clamps drug cartels and terrorists have imposed on Colombians.

Colombia itself is in a sweet spot during its economic development. Its Cabinet ministers have a sense of purpose that is strikingly reminiscent of the fourth Labour Government, which reformed New Zealand during the 1980s when it was on the brink of bankruptcy.

Agriculture vice-minister Andres Felipe Garcia electrified an audience at an agribusiness event, promoting New Zealand and Colombia as strategic partners when he spelled out why his country needed to reform. "I’m not yet 40. I’ve never known war. But I’ve never known peace. I want to consolidate peace. I don’t want my children growing up the same way. We need to increase living conditions. It is important that Colombia is advancing."

Garcia - just five weeks into the job and still without business cards - spoke passionately about how New Zealand could help Colombia develop as a food bowl to feed the world’s rapidly growing population.

This is a developing theme in New Zealand’s international trade diplomacy. The reality - as Key admits - is that New Zealand has limited arable land left for developing new farms. If the nation’s agricultural businesses want to expand, they should take their expertise overseas and form partnerships in countries with bigger land masses.

This theme has been played out repeatedly in Latin America this week.

Key told me he would ask Groser to head back to Bogota to meet Colombia’s trade minister, Sergio Diaz-Grandados, to try to accelerate progress towards launching free-trade negotiations.

"We have been quietly confident we could get an FTA started with Colombia ... We’ve really just been waiting for the domestic sensitivities around the European FTA to be passed through the Senate before we progress.

"So, while we could do a feasibility study and get it going, we’ll now look to try and step up that process."

It has been a good week for New Zealand’s trade diplomats - Key included.