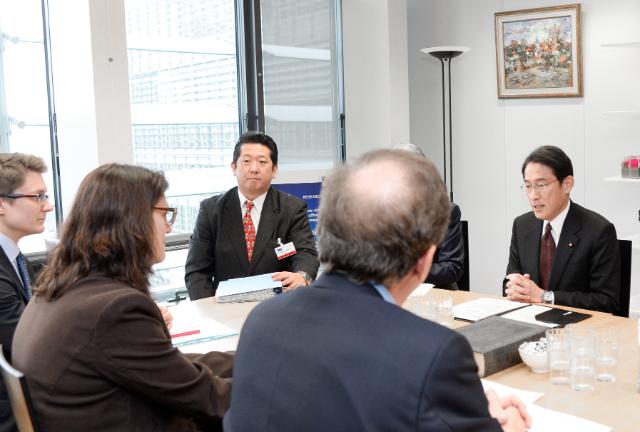 Commissioner Cecilia Malmström and Japanese Foreign Affairs Minister Fumio Kishida met today in Bonn to discuss the way forward for the negotiation of a Free Trade Agreement between the EU and Japan.

Both parties reaffirmed their commitment to reach a highly comprehensive and ambitious agreement as early as possible. "Negotiations are very advanced. While it was not possible to conclude by the end of 2016, as we had hoped, tremendous progress has been registered over the last few months. As often in a negotiation, the few remaining issues are the most difficult to be solved, but I am confident that the distance between our respective positions can be bridged soon", said Commissioner Malmström.

The meeting also allowed for an exchange of views on some domestic reforms that Japan is undertaking, and on their possible impact on the negotiating process calendar, as well as on the international situation and the perspectives for world trade. Commissioner Malmström and Minister Kishida agreed that negotiations should continue without interruption and instructed their Chief Negotiators in this respect.

Both parties also confirmed their commitment to concluding in parallel a Strategic Partnership Agreement, to ensure that the whole EU-Japan relationship is consolidated and made fit for current challenges.

The 17th round of negotiations on a Free Trade Agreement between the EU and Japan took place in Brussels in September 2016. Since then, technical negotiations have continued without interruption, with frequent stocktaking at Ministerial level and by the two Chief Negotiators.

A Sustainability Impact Assessment (SIA) of the EU-Japan FTA was carried out for the European Commission and was published in 2016.

A Strategic Partnership Agreement between the EU and Japan is being negotiated in parallel with the Free Trade Agreement.