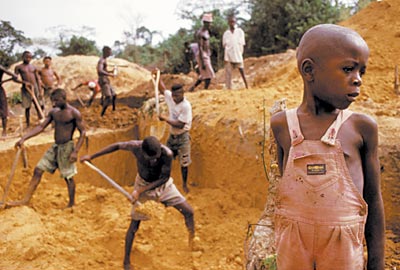 Translated by Anoosha Boralessa (March 2016) (Not reviewed by bilaterals.org or any other organization or person).

Pursuant to the ruling of an Irish court, Airbus A320 of Congo Airways, RDC’s new national airline company, is blocked at Dublin airport. The Congolese authorities are not excluding the hypothesis of “vulture fund subterfuge”.

On 21 August, the Irish High Court decided, to ground Airbus A320 of Congo Airways, a national airline company. The plane was held at Dublin Airport, before its departure for Kinshasa, scheduled for 25 August.

The dispute goes back to 2007. The claimants argue that following ICSID arbitral proceedings - a dispute over two diamond mines on Congolese territory that they had bought, RDC had accepted to pay them 11.4 million dollars (10.1 million euros). But up to now, Kinshasa would only pay 1.3 million Euro, thus giving rise to the claim to seize Congo Airways Airbus A320.

“The RDC government owns and finances the airline company. Accordingly, the plane is a State asset”, explained one of the plaintiff’s lawyers, as cited by the Irish press.

The Irish High Court injunction is temporary in nature and was taken as a preventative measure. The Irish Court would have to rule on the merits at the beginning of September.

This Monday, 24 August, the Congolese Prime Minister, Augustin Matata Ponyo, appeared on Twitter, reassuring and promising that Congo Airways’ Airbus A320 “will arrive at Kinshasa”. However, further details were not given. For their part, the plaintiffs expect a receiver-manager to be appointed and the sale of airplane to collect the 10 million euro that they are claiming.