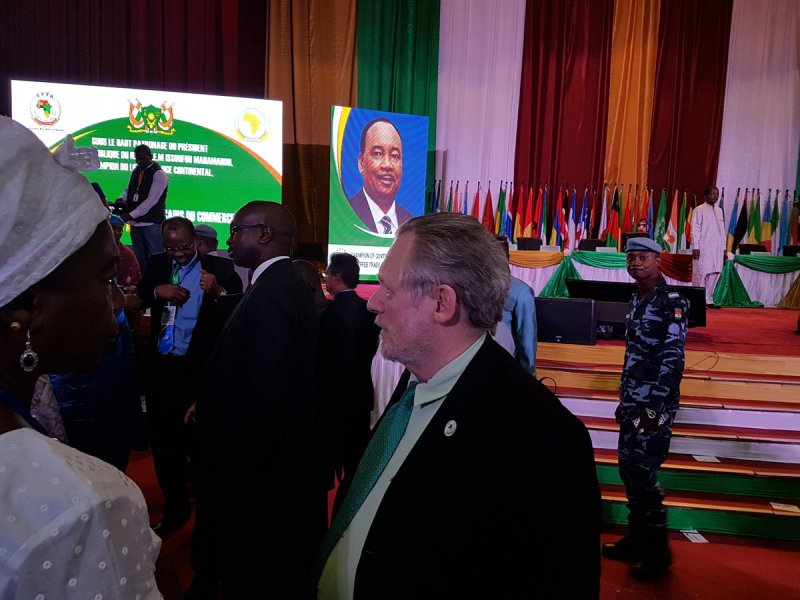 Continental free trade area agreement to be signed in March 2018

African Heads of State are set to sign the Agreement establishing the Continental Free Trade Area (CFTA) in March 2018. This follows the 4th meeting of Ministers of Trade from the African countries in Niamey, Niger on 1 and 2 December 2017 in which they approved the broad structure of the Agreement and considered the progress made in the negotiations in preparation for the Summit of Heads of State and Government due in January 2018.

When signed, the Continental Free Trade Area is going to be the biggest trade agreement bringing together 55 African countries second to the World Trade Organization (WTO) that was signed in 1994. The CFTA will be a market of about 1.3 billion people currently and is expected to be about 2 billion by 2025.

The liberalisation of trade among the 55 countries is expected to lead to a predictable environment for investment, industrialisation and values addition. As such it will create opportunities for employment and increased household incomes.

While opening the Ministers meeting in Niamey, the President of the Republic of Niger H.E Issoufou Mahamadou hailed the progress made in the negotiations. He emphasised that the CFTA, together with other frameworks in the continent, such as the Accelerated Industrial Development for Africa (AIDA); the Comprehensive African Agriculture Development Programme (CAADP); the Plan for Infrastructure Development Programme for Africa(PIDA) among others, would enable Africa to achieve its structural transformation objectives.

Thirteen countries were represented at the level of Ministers with the Uganda delegation led by the Hon. Amelia Kyambadde, Minister of Trade, Industry and Cooperatives.

In her remarks, Kyambadde emphasised the importance of establishing a Continental Free Trade Area that would cater for the needs of all businesses including the Micro Small and Medium Enterprises, the small cross border traders, women and youth as well as the emerging regional corporations in agriculture, industry and services sector.

The Ministers gave guidance to the Senior Officials and the Negotiating Forum on the outstanding areas and in particular the institutional structure for the implementation of the CFTA, streamlining the decision making processes and the treatment of the continental preferences as well as a proposal to develop an accession mechanism for those that may wish to join once the CFTA is operational. The Agreement Establishing the Continental Free Trade Area sets out a broad agenda for the negotiations for trade in goods, trade in services and dispute settlement.

The CFTA covers 2 protocols including the Protocol on Trade in Goods which is backed by ten annexes, which are: Tariff Concessions, Rules of Origin, Customs Cooperation, Trade Facilitation, Non-Tariff Barriers, Technical Barriers to Trade, Sanitary and Phyto-Sanitary Measures, Trade Remedies, Transit Trade and Transit Facilitation, Protocol on Trade in Services that will define the regime for trade in services within the Continental Free Trade Area.

The CFTA is expected to improve Intra-African Trade which stood at only 11% in 2011.

Africa is the continent with the largest arable land, 874 million hectares of which only 274 million hectares is under cultivation, while 600 million is idle. In addition, Africa has large reserve of strategic minerals, abundant aquatic resources, and the youngest population, 60%of the population. However, the continent has the lowest level of development (35 of the world’s poorest countries are in Africa); the least industrialised, and with the highest rates of unemployment between 50%-80% youth unemployment. These are some of the imperatives for us to integrate Africa.

The CFTA will open opportunities for Uganda’s goods and services throughout the continent. The following products stand to benefit from the CFTA immediately: livestock products, coffee, tea, iron and steel, among others. Services will include education, tourism, business services and infrastructure services. Furthermore, the socio-cultural links will be enhanced. It is anticipated that there will be improvement in interstate interconnectivity and intra- Africa trade.

The production sectors of agriculture, fisheries, industry, livestock and the various services sectors should increase the production and productivity and enhance their standards to meet the demands of the expanded market opportunities in Africa.