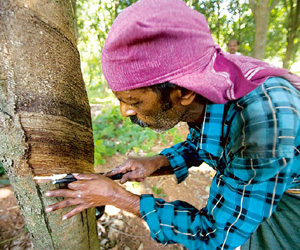 Linked to livelihoods: A farmer taps a rubber tree in Kerala. The FTA would affect at least 1.5 million people, of whom 500,000 are directly employed by the plantations, says Kerala’s finance minister Isaac. (Vishwanathan / Bloomberg.)

CPM gets set to protest FTA with a human chain

The party is working to get its Kerala cadre of about 320,000 to mobilize 1.5 million people to join their hands to form the human chain

Kochi: The Kerala unit of the Communist Party of India (Marxist), or CPM, is pulling out all the stops to ensure the success of a planned statewide human chain on 2 October to protest a free trade agreement (FTA) between India and the Association of Southeast Asian Nations (Asean).

The party is working to get its Kerala cadre of about 320,000 to mobilize 1.5 million people to join their hands to form the human chain. This will be almost twice the 800,000 people that formed the first such chain in the southern state in 1987 to promote communal harmony.

Unlike the single, unbroken 700km chain that was formed along the national highway in the state then, this time there will be two more, one each in the hill districts of Idukki and Wayanad where most of the plantation crops such as coffee, tea, pepper, cardamom and rubber are grown.

These are among the crops on which import tariffs are to be pared under the FTA, said T.M. Thomas Isaac, Kerala’s finance minister. “Transporting people from far off areas will be difficult and since the two districts will be most affected, it has been decided to have separate chains there,” he told Mint. 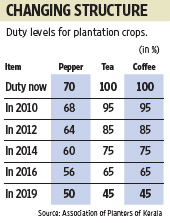 The Kerala CPM’s statewide machinery has swung into motion ahead of the 2 October protest, which falls on Mahatma Gandhi’s birthday. At least 200 meetings are being held to prepare for the human chain. Trade unions and student and youth groups have been told to organize meetings down to the household level.

To underscore the importance of the campaign, the 30th state conference of the Students Federation of India (SFI), originally scheduled at Kozhikode from 28 September to 1 October, has been delayed to free up students.

M.M. Mani, CPM’s Idukki district unit secretary, says there will be a human chain in Idukki of at least 35,000 people over about 35km.

“We have been holding family get-togethers in various parts of the district,” he said. “Unlike across the state, we might advance the chain by an hour since it has been pouring in the district and we would not want to put people to hardship.”

The concerns of Kerala growers have remained unaddressed, said Isaac, in spite of the fact that the FTA, effective 1 January 2010, will reduce import tariffs on tea, coffee and pepper, and could affect rubber and cardamom that are on a so-called exclusive list a year later.

For crops on the exclusive list, there is no immediate change in the tariff structure, but this will be reviewed after a year. Kerala accounts for more than 90% of the country’s annual rubber production of 850,000 tonnes and at least 90% of the around 11,000 tonnes of cardamom.

The FTA has also come as a timely issue for the party, given its recent debacle in the Lok Sabha election, where it won only four out of 20 seats, down from 10 in 2004. Party infighting led to chief minister and veteran leader V.S. Achuthanandan’s ouster from the CPM’s powerful politburo in June.

Isaac said the FTA would affect the livelihood of at least 1.5 million people, of which 500,000 are directly employed by the plantations.

As for the argument that the tariff reductions are over 10 years, giving planters enough time to increase productivity, Isaac said there has to be a financial package to achieve this.

“Any move for replantation and rejuvenation of the existing plantation sector will call for huge investments and it is the responsibility of the Union government to provide a financial package,” said Isaac.

However, experts are less sympathetic, pointing to the low productivity of plantations.

“FTA or no FTA, Kerala’s plantation sector cannot afford to continue in the current pattern,” said K.J. Joseph, fellow at the Centre for Development Studies, an autonomous research institute in Thiruvananthapuram. “With this FTA it becomes all the more imperative for us to be internationally competitive. This pact has to be turned into an opportunity.”