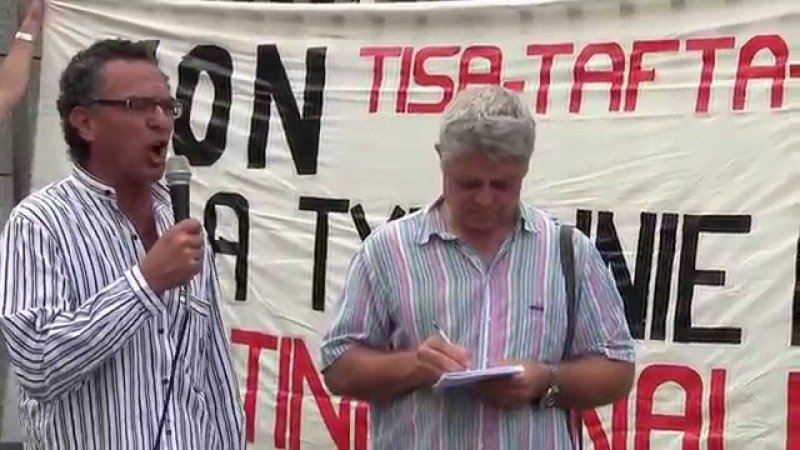 Geneva, 3 Jun — Cracks are finally emerging in the grossly imbalanced, plurilateral talks on a Trade in Services Agreement (TiSA) being pursued by 23 countries, after the European Union and several other members voiced concern about the overall quality of the latest revised offers and the exclusion of Mode 4, maritime transport, and sub-federal categories among other sectors, several trade envoys told the SUNS.

Although the trade ministers and senior officials of the TiSA countries who met on the margins of the annual Organization for Economic Cooperation and Development (OECD) meeting in Paris put up a brave face by issuing an optimistic statement about concluding the negotiations by the end of the year, they could not conceal their growing disappointment over the poor quality of the latest revised market access offers as well as back-tracking by some members of the group, in offers well below the overall GATS (General Agreement on Trade in Services) floor, participants maintained.

The EU came out into the open at the Paris meeting on Wednesday (1 June) by suggesting that the level of "ambition" in the revised offers is lacking. "The recent revised offers and the work done so far represent real improvement, but we certainly need more ambition," the EU’s trade commissioner Cecilia Malmstrom said.

"The EU is ready to go an additional mile but everyone needs to join if we want to achieve an agreement able to shape the global economy of the 21st century," she said.

The US, according to one source, has not included an offer on Mode 4 (delivery through movement of natural persons) and maritime transport services while raising the ante on financial services, telecom services, e-commerce, and localization (local content requirements in services, particularly servers and other requirements in e-commerce).

The US is also not ready to table and commit its sub-federal sectors in the overall market access demands.

However, Washington pressed the other members to start negotiating about new services which are not yet fully implemented by several TiSA member countries, the source said.

The US is also not prepared to accept any reservations/exceptions in the national treatment provisions for new services and other areas in which the TiSA members are following the negative list criteria for the agreed sectors, according to the source.

While Uruguay and Paraguay have withdrawn from the TiSA talks, Mauritius, which has become a tax haven for alleged dubious/illegal trusts and companies, has circulated its latest offer. Taipei did not table its latest offer because of the recent elections.

At the end of the 18th round of negotiations on Thursday at the EU mission, differences among the participants were writ large on several aspects of the negotiations.

During the eight days of negotiations that began on 26 May at the EU mission, the TiSA members discussed revised market access offers in areas such as short-term services providers under Mode 4, telecom, financial services, and transport sectors (air, maritime, and road), energy, environment, and delivery services.

They also discussed textual provisions and annexes on Mode 4, transport sectors, telecoms, financial services, localization, and e-commerce. Besides, there was an inconclusive discussion on the institutional architecture for the proposed TiSA agreement.

There were concerns on seven grounds following the latest round of TiSA meetings.

To start with, there are grave doubts whether the revised offers submitted by 22 countries are above the "GATS floor" which is what was envisaged when the negotiations were launched in early 2012.

The question over the GATS floor came up because some members have back-tracked in their latest market access offer commitments in areas such as Mode 4, including the United States, according to a participant familiar with the technical level of discussions.

While the GATS-floor was selectively crossed by the US and other major industrialized countries, it was left hanging when it came to services that are not overly capital-intensive such as in Mode 4. Besides, the overall level of ambition in transport services involving maritime, road, and air are well below other areas because of opposition from the United States, according to another participant.

Second, the chances of good quality offers in sectors such as maritime, road, and air are unlikely to match the high level of ambition being pressed by the US and the European Union in other areas of their interest. While the two trans-Atlantic elephants are beating the drums for ambitious high-quality offers in financial services, telecommunications, environmental services, professional services, e-commerce, and localization requirements, they are not forthcoming in demands raised by the developing country members of the TiSA, said an Asian participant.

Third, the TiSA participants are unclear how to raise the level of the bar in terms of ambition with the demands being raised for matching with their best FTA (free trade agreement) commitments in different areas.

Several participants told the SUNS that it is difficult to match with the best FTA commitments because those commitments were made in the context of give-and-take between the signatories of those agreements.

Fourth, the TiSA participants are stuck because of the raging debate on "policy space" as some major developed countries including the US and the EU are not prepared to open some sectors on the pretext of policy space, participants said.

Fifth, there is growing concern, even among some developed countries such as the EU, over poor quality as well as lack of offers on contractual services providers and independent services providers in Mode 4, participants maintained.

The US did not even place an offer in Mode 4 which caused concern among several members, according to the participants.

Sixth, the US wants to introduce new services and wants the remaining TiSA participants not to place any national treatment reservations or exceptions. Several members - the EU, Korea, Switzerland, and Norway - remain opposed to the US demands on new services.

In short, the latest round of negotiations have revealed that a comprehensive and ambitious TiSA agreement covering all areas in a "symmetrical" framework is out of the question and far-fetched, participants said.

"There will be pronounced asymmetries in the levels of ambition in different services sectors, and barriers," according to several members familiar with the negotiations.

[Former trade negotiators and trade experts suggest such a plurilateral accord will be contrary to the WTO, and cannot be lodged as a plurilateral agreement in the WTO’s annex, nor would it qualify as a ‘services integration agreement’ among participants under Art. V of GATS. See Raghavan (2014) ‘The Plurilateral Services Game at the WTO’, pp 367-370, Third World in the Third Millennium CE, Vol. 2, ‘The WTO - Towards Multilateralism or Global Corporatism’, TWN, Penang.]

The United States, the European Union, and Switzerland among others want a high level of ambition in areas such as banking and insurance sectors, telecommunications, distribution and retail services, and even electronic commerce.

More crucially, the US remains indifferent to any opening in maritime services as demanded by Norway along with several TiSA members which include both developed and developing countries.

The US and the EU are not willing to support any liberalization of road transport services as demanded by Turkey and Mexico.

The US continues to turn a deaf ear to air transport services as demanded by several members such as Australia and Switzerland among others.

Against this backdrop, the TiSA ministers have agreed to place their second revised offers in October that will suggest whether an agreement is possible. The exclusion of China from the TiSA negotiations is also having an adverse impact on the plurilateral negotiations on environmental goods, participants said.

China has now called for negotiating a multilateral agreement on trade in services at the WTO and outside the TiSA, according to a participant who was present in Paris.

In crux, the US-led TiSA talks might not be concluded by the end of the year because of too many imponderables that cannot be resolved in a US Presidential election year, participants maintained.