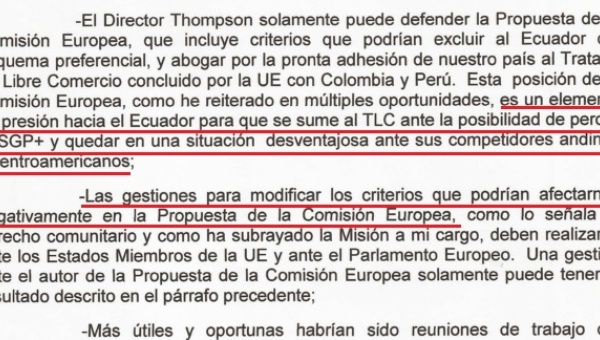 A section of the leaked document from the Associated Whistleblowing Press (Photo: teleSUR)

A ​document leaked today shows that Ecuador’s government was threatened with isolation and a devastating loss to its trade if it didn’t return to the negotiating table for the EU-Andean Trade agreement. The European Union twisted Ecuador’s arm, threatening it with isolation and loss of its trade preferences if it didn’t sign the EU-Andean Trade Agreement, it was revealed Thursday.

In the 2011 cable leaked by the Associated Whistleblowing Press, Ecuador’s then-ambassador in Brussels, Fernando Yepez Lasso, wrote to the Viceminister for Foreign Relations in Quito explaining the situation:

"The proposal of the European Commision, which includes criteria that could exclude Ecuador from the preferences framework [...], is an element of pressure on Ecuador to join the free trade agreement [...] which puts us at a huge disadvantage compared with our Andean and Central American competitors."

Ecuador signed the Agreement July 17, after four years of negotiation. Had it not, it risked losing the aforementioned EU preferences framework — freeing developing countries of duties — which would have cost Ecuador US$1.2 billion, according to a study by the U.N. Economic Commission for Latin America and the Caribbean.

Included in this cost was business lost to neighboring countries Colombian and Peru, who both signed the EU-Andean Agreement in 2012, and who are characterized by more neoliberal economic policies. Ecuador initially resisted the Andean Agreement, due to the push for a more solidarity or socialist economy, by President Rafael Correa, an economist by profession. However, these cables prove that, faced with Colombia and Peru’s agreements with the EU, resistance was extremely difficult:

"In December our duty-free trade preferences with Europe are due to expire. Europe is our primary export market for oil. And Colombia and Peru, which have similar economies to us in terms of their commerce structures, have already signed those agreements with Europe."

Correa made the above comments in an interview in July, in an attempt to justify Ecuador’s change of heart. Back then he hinted to the EU’s behind-the-scenes arm-twisting:

"We don’t believe in free trade. It is the most anti-historical thing that exists; almost no developed country used it. But we do believe in mutually beneficial trade and, furthermore, here we have huge pressures."

Ecuador’s government, however, seems to have made the best of a potentially bad situation. In 2011, Yepez Lasso wrote that "efforts to modify the criteria could adversely affect the proposal from the European Commission."

Perhaps showing just how far Ecuador’s resistance to signing the agreement has gotten them, Minister of Foreign Commerce, Francisco Rivadeneira, told journalists at a press conference that Ecuador had achieved "unprecendented" concessions.

"We were obligated to negotiate, but we negotiated hard," Correa said in the above interview.​

Find out more about the agreement in our in-depth article, coming soon.