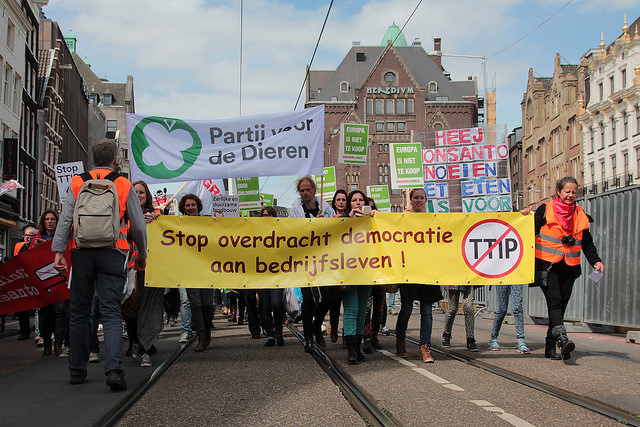 A Free Trade Agreement between the EU and four South American countries, known as the Mercosur trade bloc, has been voted down by the Dutch parliament. This not only puts the largest-ever EU trade deal at risk, it also doesn’t bode well for the upcoming Dutch vote on the ratification of the trade deal between the EU and Canada.

The fact that even a typical outward-looking trading nation such as the Netherlands turns more and more away from negotiated free trade deals, shows how the anti-free trade movements in Europe have gained popularity in Europe over the last five years which started with successful campaigns to stop trade and investment negotiations with the US.

The trade deal can only be implemented if all EU member states ratify the deal. The Austrian parliament has also refrained from confirming the trade deal with Mercosur.

The rejection of the deal puts the Dutch government in a very difficult position. Demanding that the EU Commission re-negotiate a deal that has taken twenty years of talks would hurt the reputation of the Dutch government in Brussels and would meet considerable resistance in the EU capital. But the more countries vote down the agreement, the more pressure mounts on the EU Commission to try to renegotiate with the Mercosur, a group which consists of Brazil, Argentina, Uruguay and Paraguay.

On the other hand saving face in Brussels by ignoring the outcome of the vote in parliament, which is a possibility for the government, is also difficult; it’s unlikely it would go down well with the Dutch parliament. After only minimal changes following the vote down in referenda on the EU’s constitution (2003) and the Association Agreement with Ukraine (2016), ignoring the parliamentary vote would enhance complaints that the EU has national governments on a string and that governments don’t listen to the people. Not a very attractive position either way.

The majority against the trade deal in yesterday’s vote was reached when the smallest party in the Dutch government, ChristenUnie, decided to vote alongside the opposition. First of all, objections against the deal are, among other things, fueled by farmers’ fears that the agreed phased opening of EU markets for South American meat and sugar will lead to unfair competition. Farmers’ lobby groups do not trust the EU negotiators and the Dutch Minister of Trade, Sigrid Kaag, when they say that the deal does ensure that Mercosur countries apply Dutch working conditions and environmental standards.

Secondly, data which shows the increasing pace at which the Amazon forest in Brazil is burned down by farmers has led to enhanced opposition against the trade deal that has environmental protection as one of the preconditions for opening up each other’s product markets.

The Dutch government will soon try to get the 2016 trade deal of the EU and Canada (CETA) passed in the First Chamber of the Dutch parliament. The Second Chamber voted in favour of ratification, but it was a close call to keep the CristenUnie on board, whose constituency is relatively dependent on farmers.