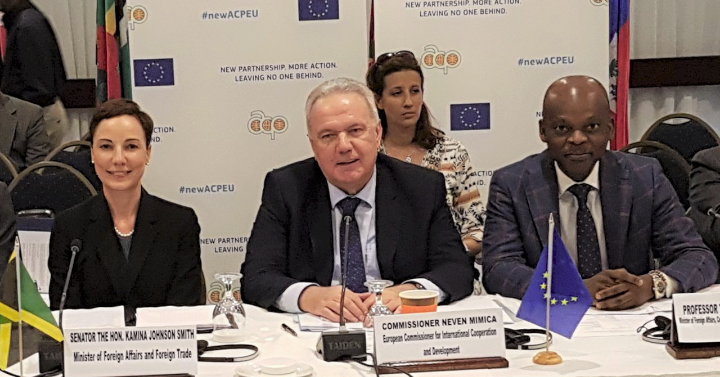 A joint ministerial council next week had been earmarked as the moment for formally concluding the successor to the Cotonou Agreement, which expires in January. But there are now doubts that it will be finalised before the end of the year.

In practice, progress has been painfully slow on a pact between the EU and the 79 countries in the African, Caribbean and Pacific (ACP) community, and few officials now believe the successor deal will be concluded in time to come into force in January 2020.

“We are looking at at least a one year extension,” said one official involved in the talks.

The delay is more the product of institutional power-struggles than a profound re-negotiation of EU-Africa policy on trade, migration and political relations.

Few expect the new accord to be ambitious. Despite being the most controversial issue on both sides of the Mediterranean Sea, the chapters on migration will not significantly change.

The ACP does not include North African countries, and Morocco, Egypt and Tunisia, all of whom have been in talks with Brussels about ‘cash for migrants’ arrangements, modelled on the EU’s accord with Turkey, do not want to be part of it.

The EU’s plan is to negotiate three regional compacts between the EU and Africa, the Caribbean and the Pacific, of which the EU-Africa deal, covering trade, aid and broad political relations, would be comfortably the most important, and controversial.

European aid disbursement, and its volume, has, once again, become the chief motivating factor for ACP negotiators

The African Union’s chief negotiator, Carlos Lopes, has a prickly relationship with his EU counterparts. Lopes has demanded a genuine ‘partnership of equals’ between Africa and the EU. The ACP team, led by Togo’s foreign minister Robert Dussey, is seen as more accommodating.

But the African side has been weakened by divisions among African leaders. Plans by Lopes and the African Union to negotiate an EU-African accord, leaving out the forty year old ACP secretariat, were derailed last autumn after a group of countries including South Africa and Morocco decided to maintain the status quo.

African foreign ministers backed the ACP’s negotiating mandate instead of the AU’s plan for a Common African position. The ACP promptly launched the first round of formal talks with the EU on the margins of the UN General Assembly later in the month.

The AU wants to keep control of policy on migration, climate change, and the development of an African Continent Free Trade Area for themselves, and leave aid and its delivery to to the ACP.

That would make sense – the Caribbean and Pacific countries have little to offer on migration and trade – and the ACP secretariat, based in Brussels, is primarily driven by how much aid, and on what projects, it can get from the EU.

But while African leaders are divided on how and who should best represent their continent’s (and their own personal) interests, the EU is mired in its own institution battles.

The European External Action Service (EEAS), the EU’s diplomatic service, is anxious to establish a more strategic relationship between the EU and the African continent, and is embroiled in its own power struggle with the Commission’s DG DEVCO (Development Co-operation) for control over EU-Africa policy.

DEVCO is leading on the post-Cotonou talks, a significant source of frustration to EEAS officials who complain that Cotonou is primarily focused on aid and perpetuates a donor/recipient relationship between the EU and Africa.

One of the main goals of Rwandan president and former African Union chair Paul Kagame, and Moussa Faki Mahamat, the Chadian chair of the AU Commission, was to obtain agreement that the AU should speak with one voice and represent the continent on the world stage.

The litmus case was to be the negotiations with the EU on the successor to the Cotonou Agreement which expires in 2020.

African Union insiders fear that the departure of Kagame will remove the impetus from the drive to make the organisation a more powerful actor on the international stage.

Egyptian President Abdel Fattah el-Sisi took over from Kagame as chair of the AU in January, and few expect el-Sisi to bat for an organisation that he has hitherto barely been interested in.

In addition to the AU’s role in the post-Cotonou talks, and wider international standing, Kagame has sought to make it self-financing via a 0.2% levy on imports. So far roughly half the AU’s 54 members are implementing the levy.

‘There is an awareness that they (the AU member states) need to work together, but it is a difficult time to push integration,’ an AU source told EURACTIV.