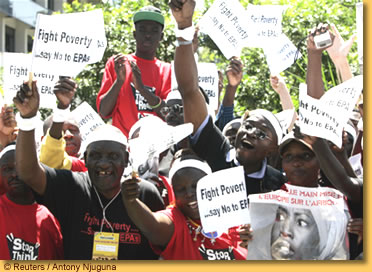 EU-Africa strategy: An incentive for development?

After “years of indifference” and one of the biggest waves of migration to ever hit Europe, Africa now tops the political agenda. That means a new strategy has to be found, according to the European Parliament. EURACTIV Germany reports.

On the 29 and 30 November the AU-EU Summit 2017 will take place in Abidjan (Côte d’Ivoire), and delegates do not want to turn up empty handed. The European Parliament, meeting in Strasbourg, recently adopted a report from the Commission’s Committee on Development whose demands are to be incorporated into this new strategy.

By the spring of 2018, the AU and EU representatives plan to revise their joint strategy, which will then feed into a new treaty and supersede the 2002 Cotonou Agreement.

“A fair and equitable partnership between our continents is needed more than ever to meet these challenges, both short and long term, and to create a safer and more prosperous future for African and European citizens, especially young people, women and the most vulnerable,” said Gianni Pittella, leader of the Group of the Progressive Alliance of Socialists and Democrats, following the resolution.

It is estimated that Africa’s population will increase to 2.5 billion by 2050. Fair trade relations, faster industrialisation and the creation of appropriate infrastructure are, according to the report, the prerequisites for African countries, especially in order to be able to integrate young people into the labor market.

To do this, the African states will have to create annually around 18 million new jobs by 2035. The infrastructure needs in Africa alone are estimated at €75 billion a year, making a modern and sustainable partnership between Europe and Africa absolutely necessary.

Preventing further migration towards the EU, as well as secure conditions for European investment capital, top Europe’s wishlist. However, this will only work if the African community as a whole develops both economically and constitutionally.

The previous EU strategy, to promote development through simple cash flow, failed. The focus of the new development strategy is on private investment. For this, African countries should create more attractive framework conditions to attract European donors and provide guarantees and risk protection to private companies.

In Africa’s interest, the investments coming from the EU would then have to be steered in such a way that local value chains would be created at local level, the industrialization of the African countries would be stimulated and structural changes would take place.

Education and the rule of law play a key role in this. Proposals made by the EU, such as launching a Youth Facility for Africa and extending the scope of Erasmus + and the EU’s vocational education and training program, could be a step in the right direction, if the gap between the needs and opportunities of the labour market on the one hand and the qualifications of graduates on the other in the target countries would be closed.

With regard to refugees from African countries, the future Africa strategy only makes sense if it is designed sustainably, according to the report. Both the UN and international NGOs emphasise that a mixture in means of combating the causes of migration and partnership-based development cooperation is not forward-looking.

It is therefore important “that development assistance is not used as a lever to cope with the migration challenge”, warns Norbert Neuser, Socialist spokesman on the European Parliament’s Development Committee and shadow rapporteur for the European strategy report.

Instead, efforts to create regular migration opportunities into the European Union need to be stepped up.

But for the Abidjan Summit to launch a true shift from the old to a new Europe-Africa partnership, real commitments by European and African leaders to reach the United Nations Sustainable Development Goals through coherent policies are needed. Background

Since two years the EU has had a trade surplus with Africa. EU exports in 2016 had a value of €145 billion. Imports amounted to €117 billion. EU-Africa trade accounts for nearly seven percent of the Union’s total external trade. Under the auspices of the EU, there are numerous bilateral agreements that regulate, among others, the movement of goods between the two continents.