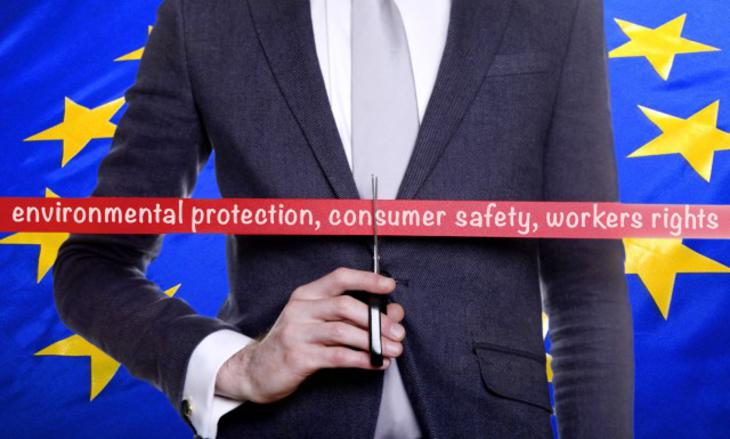 The release of the European Commission’s negotiating mandate and the other TTIP documents has done little to reduce the opposition from civil society organisations to the trade agreement, a US Dept of Commerce official notes. (Image courtesy of CEO)

The European Commission has published the draft legal text for a chapter on general regulatory cooperation which it presented to the US during the latest round of negotiations for a Transatlantic Trade and Investment Partnership (TTIP), held last week in Brussels.

The document proposes principles and some mechanisms for regulatory cooperation between the two sides of the Atlantic. It says the EU and US should:

publish, at least once a year, a list of planned regulatory acts at central level – federal in the US, EU level in Europe – providing information on their objectives and scope and identifying those likely to have a major impact on international trade or investment;

provide details of the planning of the legislative process leading to the adoption of a new regulation, including information on any planned stakeholders’ consultations (CW 1 October 2014);

examine how the other party has addressed, or is planning to address, a specific issue through regulation, as part of the impact assessment for the planned law.

A bilateral cooperation mechanism should be set to apply the rules in the general regulatory cooperation chapter, the Commission says, with a designated focal point in each of the US and EU central administrations. Each focal point could ask for regulatory cooperation on specific regulations, either existing or planned, and may propose “a joint examination of possible means to promote regulatory compatibility”. This would be through methods such as “mutual recognition of equivalence of regulatory acts, in full or in part”, harmonisation or simplification.

In addition, “the parties agree to cooperate, in areas of common interest, with respect to pre-normative research, and to exchange scientific and technical information relevant for this purpose,” the Commission document says.

In addition, the cooperation mechanism would include a regulatory cooperation body (RCB), which would:

monitor the implementation of the provisions in the overall regulatory cooperation chapter; and

prepare joint initiatives or proposals for international regulatory instruments, among others.

Eight separate sector chapters, covering regulatory cooperation in specific area such as chemicals, cosmetics, textiles, pharmaceuticals, are also to be included in TTIP. No draft legal text has been presented by any of the two sides in these areas because the talks have not yet reached that stage.

If any conflicts were to arise between the provisions of the general regulatory chapter – “horizontal regulatory cooperation” in Commission-speak - and the still be drafted sector-specific chapters, the latter would take precedence, the Commission proposes.

Lacking draft legal texts at this stage, the Commission published a new factsheet on regulatory cooperation in the eight sectors, detailing its objectives and understanding of each of them in the TTIP context. The document highlights the opportunity for regulators from both sides to assess the same substances at the same time and exchange information in the chemical sector (CW 5 February 2015), as well as the potential to exchange information on scientific assessment of existing and new UV filters in cosmetics (CW 2 February 2015). In the textile field, the EU executive wants to “seek convergence” with the US on the voluntary standards and test methods for protective clothing, technical textiles and child safety, among other objectives (CW 8 January 2015).

The Commission is working on a proposal for cooperation between the two parties, targeting the US state and EU member state level. It will be presented before the next round of TTIP negotiations, expected in April in the US (CW 12 June 2014).

While the Commission is publishing more documents as part of its commitment to transparency on TTIP, the US is not planning to follow suit. “We don’t have any plans to release negotiating texts; we need to maintain the balance between transparency and the need to share information and have a frank conversation as part of trade negotiations,” Jeff Weiss, senior advisor for standards and global regulatory policy at the US Department of Commerce told Chemical Watch last week. He said the release of the Commission’s negotiating mandate (CW 10 October 2014) and the other TTIP documents has done little to reduce the opposition from civil society organisations to the trade agreement.