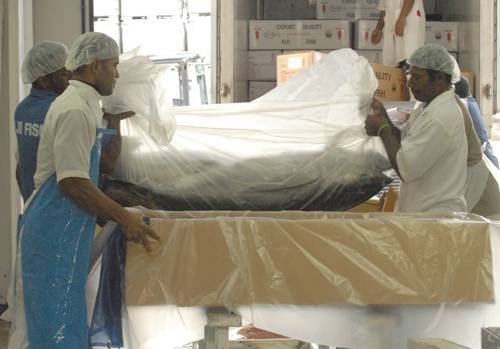 Workers at the Fiji Fish in Lami pack fish in a box for export. Fiji fisheries products are still not allowed into the EU market.

IT’S like being caught between the proverbial rock and a hard place. Fiji is on the verge of signing off on an economic partnership agreement (EPA) with the European Union — something it is forced to do in order to guarantee any future duty-free and quota-free access for certain products. But one of the main beneficiaries of the agreement —our fisheries sector— cannot enjoy any of the duty-free, quota-free access because it does not meet stringent EU rules and regulations.

It’s a situation that has forced the European Commission to come out on the defensive. This as local operators were critical of European vessels already fishing in the Pacific, despite local operators not being able to send their exports to the EU.

The EC has been quick to defend European-registered vessels, saying such ships which used Fiji ports were not receiving special treatment.

According to the EC, the concerns of local Fiji fleet operators is that they still do not fully comply with European Union regulations. This disallows Fiji from exporting fish to the EU.

The EC said Fiji was de-listed as a country eligible to export fish products to the European markets last year because of problems with certification.

It said an inspection of facilities in Fiji conducted in June by the European Food and Veterinary Office found that while public sector bodies passed inspection, private fishing operations in Fiji still needed some improvement in order to comply with EU regulations.

The EC added European-registered fishing boats used Fiji harbours as unloading and transit points had to be inspected and certified by the "competent authority (CA)" the same as any other vessels.

In Fiji’s case, the CA the EU recognises is the National Health Board.

It said the board was helping with extensive reforms to bring all Fiji fishing operations into compliance with EU rules and regulations.

Despite the local fleet’s failure to meet EU standards, Fiji is expected to sign off on an interim EPA with the EU soon.

The agreement, which was first initialled at the end of 2007, focuses on trade in goods and includes important provisions on rules of origin for the fisheries sector.

Under the agreement all imports from Fiji and Papua New Guinea would have immediate duty free, quota free, access to the European market (with short transition periods for rice and sugar).

In return Fiji was expected to gradually remove customs duties on 87 per cent of imports from the EU over the next 15 years, with Papua New Guinea to move such duties on 88 per cent of EU products.

PNG Foreign Affairs Minister Samuel Abal signed off on the EPA with the EU in London on Monday. EU trade commissioner Catherine Ashton signed on behalf of the European Commission, with Anders Ahnlid, director general for trade, signing on behalf of the Swedish presidency of the EU.

"This agreement is an important step towards a strong and lasting EU-Pacific trade and development partnership," Ms Ashton said.

"We have already seen how the initialling of the agreement has delivered results, with new investment flowing into the fisheries industry, supporting development in Papua New Guinea and creating jobs."

In Fiji’s case though, any duty-free, quota-free access especially for our fish exports to the EU still hinges on whether we can meet EU standards. Without that, our operators will continue to not have EU access, even though EU operators have access to the region.