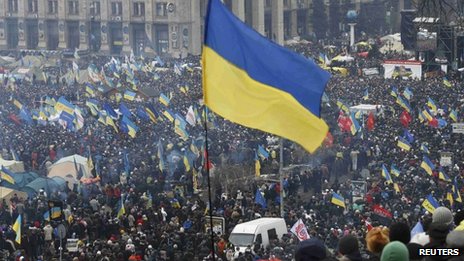 The European Union has suspended work on a trade and association agreement with Ukraine after failing to get a "clear commitment" from President Viktor Yanukovych to sign it.

Mr Yanukovych - apparently under pressure from Russia - backed out of signing it in November.

But Ukraine and the EU had said they would continue negotiating.

Tens of thousands of people are again protesting in Kiev against Mr Yanukovych’s failure to sign.

This is the latest in a series of demonstrations over the past few weeks by the opposition who see Ukraine’s future as part of the EU rather than aligned with Russia.

The announcement by Stefan Fuele that the EU was suspending talks with Ukraine over a wide-ranging political and free trade agreement will undoubtedly stoke the already high tensions in Kiev.

President Viktor Yanukovych has tried to mollify the crowds camping out in the capital’s central Independence Square by assuring them that his government was serious about signing the treaty with the EU - just not right now.

But EU officials, it seems, have called Mr Yanukovych’s bluff, saying they will recommence talks when the Ukrainians show sufficient commitment.

This means that the government has no way of satisfying one of the opposition’s key demands - that the deal be signed immediately.

At the moment, tens of thousands of pro-Yanukovych supporters from eastern Ukraine are in Kiev; some are attending the second day of pro-government demonstrations, but many are simply milling about the capital. At the moment, all is calm. But the potential for clashes is ever present.

The series of protests, the largest since Ukraine’s 2004 Orange Revolution, are designed to push Mr Yanukovych to dismiss his government and call fresh elections, opposition leaders say.

Make-shift barriers around the perimeter of the main protest encampment have been strengthened following an attempt by special police to dismantle them earlier this week.

The EU’s frustration at the Ukrainian president’s position on reaching a deal with the bloc was evident in a tweet from EU Enlargement Commissioner Stefan Fuele announcing the suspension of talks.

"Work on hold," he tweeted, adding that he had told Deputy PM Sergiy Arbuzov that Ukraine needed to show a "clear commitment to sign".

Mr Yanukovych has said he fears the association and trade agreement will put at risk many enterprises dependent on trade with Russia.

The president - who says he eventually aims to sign the deal - has also admitted being under heavy pressure from Moscow, which wants Kiev to join a Russian-led customs union instead.

He has said the EU would need to provide at least 20bn euros (£17bn; $27bn) a year to upgrade Ukraine’s economy.

Moscow has already put economic pressure on Ukraine, with customs delays and a ban on Ukrainian chocolates, and there are concerns it could escalate such measures if Kiev drew closer to Brussels.

A leading voice on United States foreign policy, Republican Senator John McCain, is in Kiev where he addressed the protesters.

"Ukraine will make Europe better and Europe will make Ukraine better," he told them.

"We are here to support your just cause, the sovereign right of Ukraine to determine its own destiny freely and independently. And the destiny you seek lies in Europe," he said.