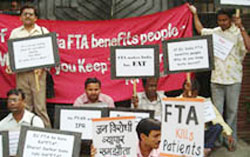 A beleaguered UPA Government reeling under pressure from a united opposition on rising food prices, came under further attack from a coalition of groups representing farmers unions, trade unions, hawkers, public health and other civil society organisations on the ongoing, secret negotiations on a European Union–India Free Trade Agreement (EU-India FTA). In a demonstration organised under the banner of `Forum Against FTAs’ outside the Commerce Ministry, groups protested against the last round of negotiations between EU and Indian bureaucrats currently underway in Brussels. Reports from Ministry sources indicate that the FTA will be signed in October 2010.

The Forum’s repeated requests for access to information and genuine discussion in the Parliament and the States on this FTA have gone unheard. "The negotiators should have the mandate from the Indian Parliament and the State governments for these negotiations. So far the state governments have not been consulted and genuine discussion has not taken place in the Parliament," said Manicandan of the Forum Against FTAs secretariat.

Supporting the Forum’s demands for transparency, Commonwealth Human Rights Initiative stated that "with the operationalisation of the Right to Information Act, the UPA government is duty bound to share information with the civil society and general public while formulating important policies. FTA is an important trade policy and all facts and figures relating to FTA negotiations must be shared with people by law".

Outlining their concerns on various sectors, the groups highlighted the baffling manner in which the provisions of the FTA related to agriculture were being negotiated. The FTA leaves the large subsidies that the EU gives to its farmers virtually untouched but calls for a 95% reduction in India’s import duties to virtually zero. `This will hit the Indian agricultural sector hard impacting lives and livelihoods dependent on it. In addition the services and investment chapter of the FTA will make the entry of European agro-processing and retail firms easy thereby impacting how food is produced and sold in our country. Small and marginal farmers, processors, distributors and retailers in India will be pitched against the power of multinational retail firms’ said Yudhvir Singh of the Indian Coordination Committee of Farmers Movements.

The demands on the financial sector would make it difficult to control the rapid influx and exit of risky investors, a major reason for the financial crises around the world. `In the wake of the global financial crisis, a serious rethinking on opening financial services must take place. The crisis has de-legitimised the "best practices" of European banks and calls for an expansion of the domestic regulatory space not its restriction as the EU is demanding," said Kawaljit Singh of Madhyam.

The negotiations on the EU-India FTA have also led to increasing concern on the TRIPS-plus demands being made by the EU and their impact on access to medicines. `India has taken the lead in the developing world in balancing public health needs with intellectual property rights. The EU’s demands for TRIPS-plus intellectual property rights threaten this critical balance and would lead to legislative and policy changes in India that will undermine access to affordable medicines not just in India but across the developing world," said Vikas Ahuja of the Delhi Network of Positive People (DNP+).

Members of the Forum Against FTAs met with officials from the Ministry of Commerce and Industry which is negotiating the FTA and submitted a memorandum, copies of which have also been sent to the Prime Minister’s Office. The Memo demands that the UPA release all information, studies and negotiations on the EU-India FTA and all other FTAs being negotiated. A further demand for a white paper on the UPAs FTA strategy has been made.

We are writing to you to express our serious concerns over the EU India Free Trade Agreement (FTA), as this FTA with the 27-European country bloc will impact critical aspects of the Indian economy and people’s lives. We note with grave concern that the GOI’s numerous FTAs under consideration cover areas that fall within the state and concurrent list, but the GOI has ignored and sidelined the parliament, state governments, citizens of India including farmers, workers, womens’, dalit and adivasi groups who have not been consulted in the process of FTA negotiations. No consultations, public discussion of the pros and cons, release of government studies, government positions and submissions have taken place with these constituencies. This makes a mockery out of the federal polity and the democratic ethos of India.

Repeated requests for consultations access to information and genuine discussion in the parliament and the states on the FTA have gone unheard. Both the GOI and the European Commission have consistently refused to share information with civil society groups and the general public— undermining the basic tenets of democratic process, policy making and law.

The EU-India FTA raises several key concerns with regard to peoples’ livelihoods and an just economic development strategy for the country that is now considered "emerging":

It is of grave concern that the EU-India FTA negotiations till date have been marked by a gross absence of transparency and public debate. There is an urgent need for an informed public debate on the feasibility and development outcomes of the GOI’s FTA strategy as a whole.

We request you to immediately:

As the European Commission (EC) and India meet for closed-door negotiations on a Free Trade Agreement (FTA) this week, international medical humanitarian organisation Médecins Sans Frontières (MSF) warns this is the last chance to remove provisions that will block access to life-saving medicines for people living in the developing world.

"Neither Indian Trade Minister nor the EU Trade Commissioner have given a public commitment that the provisions that affect generic competition and access to medicines are off the table," said Michelle Childs, Director of Policy & Advocacy at MSF’s Campaign for Access to Essential Medicines. "We will continue to fight until they are officially and unequivocally out of the agreement."

India is the source of 80% of the AIDS medicines used in MSF projects. Without quality affordable medicines from Indian sources, it would have been impossible to scale up treatment to the levels seen today, and millions of lives would not have been saved.

Through their governments’ contributions to the Global Fund and other international health agencies, European taxpayers pay for programmes that can treat far more people thanks to affordable medicines from India. But MSF and other groups are concerned that the EC is now trading this away. The draft agreement contains several alarming provisions on intellectual property and enforcement, much stricter than anything required under the international trade rules, that threaten the supply of essential medicines from India.

"The right to life and health of people in developing countries is being sacrificed in this deal," said Loon Gangte, president of the Delhi Network of Positive People (DNP+). "Do not put profits before patients. This trade agreement must not undermine India’s ability to provide people living with HIV/AIDS here and outside India with life-saving medicines in the name of open markets."

One of the harmful provisions in the FTA is `data exclusivity’. If India introduces data exclusivity, generic companies wishing to register a medicine will be obliged to repeat clinical studies. This not only creates huge financial barriers that act as a disincentive to generic companies, but it is also in violation of medical ethics, as people are subjected to the risks of clinical studies for something that is already known. Data exclusivity therefore creates a new patent-like barrier to access to medicines and vaccines, even when these products are not protected by a patent.

"The impact of this proposed agreement is truly global, as treatment will become considerably more expensive, and countries and funders may have to ration the numbers of people they can put on treatment", said Ariane Bauernfeind, HIV/AIDS programme manager for MSF projects in South Africa, Malawi, Lesotho and Zimbabwe. "We are already concerned that newer medicines have been patented in India. The FTA threatens to make an already bad situation worse."

Also in the draft FTA is a provision that extends the duration of a patent term beyond 20 years. In addition, after multiple incidents of Indian generic medicines being detained while in transit to other developing countries in Latin America, Asia and Africa, the EU is now seeking to legitimise such measures by forcing India to adopt them.

Formal talks between European and Indian negotiators are opening in Brussels this week. The EU has indicated that it wants to conclude the FTA negotiations ahead of the EU-India summit in October.