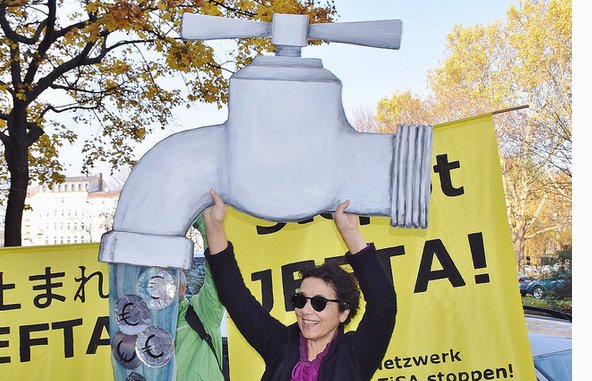 The European Parliament voted 474 in favor to 156 against the agreement that binds two economies accounting for about a third of global gross domestic product and also signals their rejection of protectionism.

Both face trade tensions with Washington and remain subject to U.S. tariffs imposed by President Donald Trump on imports of steel and aluminum, although the two have agreed to start separate trade talks with the United States.

“This will bring clear benefits to our companies, farmers, service providers and others,” EU Trade Commissioner Cecilia Malmstrom said in a statement.

“Our economic partnership with Japan – the biggest trade zone ever negotiated – is now very close to becoming a reality.”

Japan had been part of the 12-nation Trans-Pacific Partnership that Trump rejected on his first day in office, turning Tokyo’s focus to other potential partners - such as the European Union.

The EU has also sought other partners after TTIP (Transatlantic Trade and Investment Partnership) negotiations with the United States stalled in 2016. It concluded an updated trade deal with Mexico earlier this year.

The EU-Japan agreement will remove EU tariffs of 10 percent on Japanese cars and 3 percent for most car parts. It will scrap Japanese duties of some 30 percent on EU cheese and 15 percent on wines as well as open access to public tenders in Japan.

It will also open up services markets, in particular financial services, telecoms, e-commerce and transport.

The European Commission, which coordinates trade policy for the 28 EU members, said Wednesday’s vote paved the way for the agreement to enter force on February 1. Japan’s parliament approved the deal on Saturday.

The flagship deal comes after widespread anti-globalisation protests threatened the EU-Canada Comprehensive Economic and Trade Agreement (CETA) when a region of Belgium objected to the deal in 2016. It finally entered force in 2017.