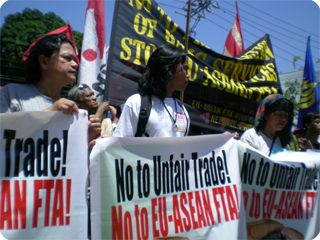 WITH the future of the Trans-Pacific Partnership (TPP) becoming uncertain, a top European Union (EU) diplomat has hinted the possibility of reviving the Free Trade Agreement (FTA) talks between the EU and Asean that were suspended almost a decade ago.

“The EU remains committed in its engagement with Brunei Darussalam and the region as a whole and looks forward to pursue trade liberalisation initiatives with its partners in Asean as we continuously seek ways to strike trade deals that will benefit all,” Vincent Guérend, Ambassador of the EU to Indonesia and Brunei Darussalam said yesterday.

The EU non-resident envoy, who is in the Sultanate for a goodwill visit along with other residing and non-residing diplomats from EU countries to Brunei, was responding to the Bulletin’s question on the possibility of reviving talks on a region-to-region FTA with the TPP’s fate hanging in balance after the United States of America backed out from it recently.

Although talks on striking a deal for an EU-Asean FTA were suspended almost a decade ago due to different level of expectations from both sides, Vincent said the EU has been in favour of bilateral agreements with Asean member states that have the same level of expectations. “The European Union is advancing these bilateral negotiations, but it is looking at embracing an EU-Asean trade deal once it can achieve a critical trade mass in the region, especially after concluding a deal with Indonesia which has a sizable GDP and population.”

He further said that it is in the EU’s trade policy to negotiate ambitious and deep trade agreements like the TPP that go much beyond cutting tariffs and have a wide scope of structural regulations such as competition, labour and environmental laws and also intellectual property, adding that these have the potential to materialise as they are not comparable with other free trade agreements that Asean has had in the past with its other partners.

Vincent highlighted that the EU, which is currently the largest trade bloc worldwide, is very committed to continuing its agenda of negotiating free trade agreements worldwide and shared that it has been in negotiations with more than 15 or so countries from the South America to Japan and also African sub region countries over the last few years.

“In this region (Southeast Asia), we have concluded an agreement with Singapore and Vietnam and also started negotiations with the Philippines, Indonesia, Malaysia and Thailand… so the free trade agenda is very much one of the top agendas of the EU also for the simple reason that the prosperity of the EU lies very much on trade openness for all European countries,” he further shared.

The delegation of 14 EU diplomats – including 12 ambassadors accredited to Brunei Darussalam and two deputy heads of mission – are currently in the Sultanate for a two-day visit focussing on enhancing EU-Brunei and EU-Asean relations and giving opportunity to discuss matters of bilateral importance including strengthening political ties and advancing trade relations as well as a range of regional and global issues.